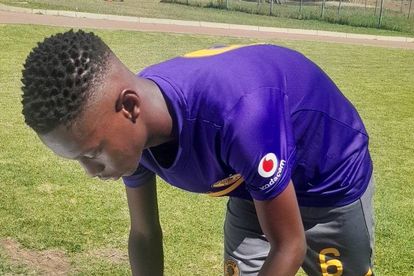 Lwandle Ngobese had been the subject of intense speculation before reports claimed that Chiefs had beaten rivals Mamelodi Sundowns to his signature not too long ago.

Not yet a Chiefs player

The youngster is thought to be a talented player just like his father was, with lots of potential. A picture of him wearing Chiefs training gear then seemed to confirm that he was potentially following in his father’s footsteps at the club. However, according to the latest from Zwane, it seems like many may have jumped the gun with regards to the information provided. “10111” as Zwane is affectionally known as has confirmed that Ngobese hasn’t signed on at the club just yet, and is still on trial.

“I have spoken to the coaches on the other side (at the Chiefs academy) and they said they are assessing the boy (Landile Ngobese), I don’t know if he is still around because I have not been there in the past three days because of our tight schedule. But the last time I was there, they were still assessing him to see if he could be given the opportunity to be part of our development structures. I will get feedback when I next go there. At the moment I don’t know whether he is going to be a part of us or not,” said Zwane.

Zwane sounded a warning with regards to the hype surrounding the player, and said that it would be the Chiefs academy coaches who would have the final say on whether he was talented enough to make it at the club, or not.

“The challenge is that most people when they bring players to us they will give us the impression that the boy is quality. Maybe he is quality for other people and not for Kaizer Chiefs because we have our way of doing things and the kind of players we want to develop and the way of playing. So if he (Landile Ngobese) can tick all the boxes then I think he will be more than welcome. The fact that he has that history with the club through his late father will be a plus for us. We want players who want to play for this team because they love this team with passion more than anything else,” concluded Zwane according to the Citizen.

It now remains to be seen if Chiefs will soon make a decision and announcement on young Ngobese.

Stage 9 of the Dakar Rally slowed down Lategan and Cummings