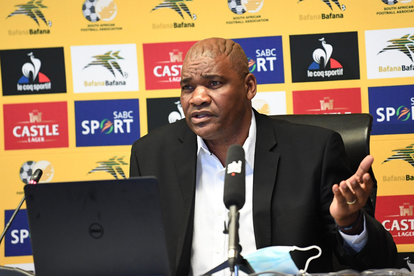 As a football fan, it’s painfully embarrassing to have someone watching AFCON 2021 before they ask “where are Bafana Bafana?” Why did they not qualify?”

So how did Bafana Bafana exactly fail to make AFCON 2021? Where did it go wrong? Well, the issue had something to do with a couple of smaller footballing nations by the names of Sao Tome & Principe and Sudan.

Bafana Bafana failed to get the expected results against these two nations in the group qualifying games.

South Africa, with the respected history as the 1996 AFCON champions and the best domestic club league in Africa, were expected to surely finish second in the group behind Ghana to qualify.

Unfortunately, and to the utter dismay of the nation, Bafana Bafana finished third behind Ghana and Sudan. Coach Molefi Ntseki, who was a controversial appointment from the start, was promptly fired after the shocking failure and made way for Hugo Broos.

The damning results came at the very start on matchday one. Experience has proved that you just do everything to either draw or win if you’re serious about qualifying, especially the first game, but Bafana lost 2-0 to Ghana

The next result was an unconvincing 1-0 win over minnows Sudan in Mzansi, before back-to-back wins over the group’s weakest link Sao Tome and Principe.

Disaster struck in the final two games. Bafana Bafana drew 1-1 with Ghana in Johannesburg, before losing the final game to Sudan 2-0. The nation was left gobsmacked as the AFCON 2021 ambition went up in smoke.

Ghana progressed to the tournament as group winners, while Sudan also booked a spot as runners’ up.

Meanwhile, Bafana Bafana have also failed to qualify for next year’s FIFA World Cup in Qatar, after Ghana controversially won the group with a very dubious penalty on the final day of the qualifiers.

Our next shot at appearing at a major tournament will be AFCON 2023 in Guinea.