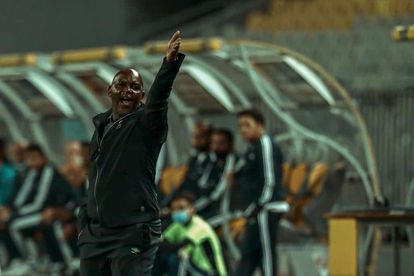 Pitso Mosimane will be carrying the hopes of Egypt and Africa when he sends out his team, Al Ahly, in the Club World Cup which kicks off in Qatar on Thursday, 4 February, writes Dean Boyle.

The tournament features the champions of each continent (although not all seven are competing) battling for the coveted trophy and the right to be called the “best club in the world”.

Al Ahly are currently unbeaten since Mosimane signed on as coach in October 2020.

“Jingles” boasts an incredible record of 17 wins and 4 draws, which equates to an astonishing 81% win ratio which is among the best in the world.

Mosimane led Al Ahly to the 2020 CAF Champions League title which booked them a match against tournament hosts and Qatar champions Al-Duhail on Thursday.

For Mosimane, this is just the beginning of what he hopes to achieve long-term.

Pitso Mosimane wants to raise African football to new heights and can do just that with victory on Thursday which would set up a clash with reigning Champions League and Super Cup winners, Bayern Munich.

However, Mosimane will have his work cut out for him, but believes in his side and his management staff.

He has the added incentive of wanting to achieve greatness as a South African abroad.

Just last week Mosimane encouraged all South African football coaches to attempt to emulate the success the likes of Trevor Noah and Black Coffee have achieved outside of Mzansi.

Mosimane wants to emulate them by being successful on a global stage and the Club World Cup presents him with the perfect opportunity to do just that.

Pitso Mosimane wants to inspire those who come from difficult backgrounds and for South Africans not to settle for “amabinneplaas” (locally based), but to look beyond its borders and any mental restraints – to go abroad and achieve greatness!

‘Love is beautiful’: Couple gets engaged at Kelly Khumalo’s show!

‘From his father’s emerald mine’: Elon Musk’s ex to sell necklace