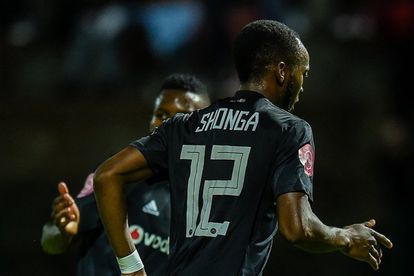 A well-traveled former Orlando Pirates striker has found a new club in Morocco following his departure from the PSL at the of last season.

Justin Shonga has officially joined Maghreb AS de Fes in the Botola Pro League, and he was unveiled on Tuesday evening.

Shonga has been with different African clubs since his departure from Pirates in 2019, including Tshakhuma Tsha Madzivhandila (TTM), Cape Town City and Ismaily SC.

He was most recently on the books of Sekhukhune United whom he had joined in January following his brief stint with Egypt’s Ismaily.

However, the 25-year-old marksman was released barely six months into his contract by Sekhukhune who took a different direction with the appointment of Kaitano Tembo as head coach.

Now, Shonga will spend the current season with Maghreb de Fes, but details around his contract aren’t clear at this stage

Shonga will not only be campaigning in the Botola Pro League with Maghreb de Fes but the club will also be banking on his experience in the CAF Confederation Cup this season.

The Moroccan outfit qualified to play in the CAF Confederation Cup after finishing fourth in the Botola Pro League log last season.

Maghreb de Fes finished the 2021-22 season with 45 points from 30 games, after having won nine, drawn 18 and lost just three of those games.