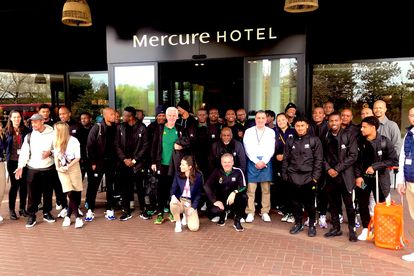 Bafana Bafana fans will be feeling quietly confident their team will be one of the 24 nations competing at AFCON 2023 in the Ivory Coast. Photo: Twitter @BafanaBafana

Bafana Bafana fans will be feeling quietly confident their team will be one of the 24 nations competing at AFCON 2023 in the Ivory Coast. Photo: Twitter @BafanaBafana

Following Tuesday’s group stage qualifying draw for the 2023 Africa Cup of Nations (AFCON), Bafana Bafana fans will be feeling quietly confident their team will be one of the 24 nations competing in the Ivory Coast next year.

In total, 48 countries were drawn into 12 groups of four teams with the top two sides packing their bags for what will be the 34th edition of Africa’s premier tournament.

Hugo Broos’ team have been drawn in Group K alongside Morocco, Zimbabwe and Liberia.

However, Zimbabwe’s participation isn’t assured after they, along with Kenya, were suspended by FIFA due to government interference in the running of the sport and they will only be allowed to compete if their bans are lifted by mid May.

If the bans aren’t lifted, two of thee remaining three teams from the group will qualify.

However, even if Zimbabwe are permitted to play in the qualifiers, Bafana Bafana shouldn’t lose any sleep having to play home and away matches against their neighbours.

South Africa and Zimbabwe were drawn in the same group for the recent CAF qualifiers for this year’s Soccer World Cup. On that occasion, Bafana Bafana won 1-0 on home soil and the sides played out to a goalless draw in Zimbabwe.

While Morocco won’t be easy to beat, they certainly aren’t unbeatable and may well have one eye on their participation in the 2022 Soccer World Cup in Qatar.

Liberia are ranked 46th in Africa and 149th in the world in the latest FIFA rankings and shouldn’t pose any threat – both home and away – to Bafana Bafana.

The 2023 AFCON tournament is scheduled to take place from 23 June to 23 July next year.

South Africa failed to qualify for AFCON 2021 in Egypt. Bafana Bafana memorably won the tournament on home soil in 1996.