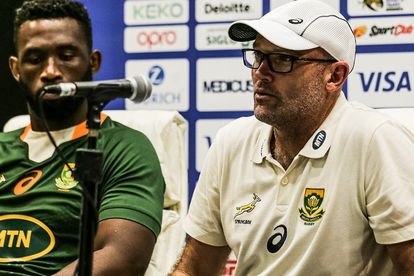 Springboks coach Jacques Nienaber said his team had come through a Rugby Championship “semi-final” against Argentina despite “disturbing” media allegations regarding his players.

Speaking in an online media conference after South Africa’s 36-20 win against Argentina in Buenos Aires on Saturday, Nienaber said the distraction of dealing with a potential newspaper controversy had come just five hours before the kick-off.

A last-minute bonus-point try enabled South Africa to draw level with New Zealand on 14 points at the top of the championship table with one round remaining.

The Springboks play a return match against Argentina in Durban on Saturday and will know exactly what they have to do after the All Blacks host Australia in Auckland earlier in the day.

Bombshell article was not published

SA Rugby issued a statement three hours before the Buenos Aires game saying it was aware that “unsubstantiated allegations of failed tests for recreational drugs by Springbok players are circulating among members of the media”.

One South African website claimed that SA Rugby had threatened legal action against the weekly Rapport newspaper, which it said was planning an “explosive” story.

The newspaper did not publish such an article on Sunday.

What SA Rugby said was potentially “distracting and destabilising” to the Springboks came a week after Rapport broke a story about an alleged affair between Springbok flyhalf Elton Jantjies and the team dietician, both of whom were sent home from Argentina in the wake of the allegations.

Nienaber said he was concerned about the timing of allegations of drug use and alleged positive tests.

“From my side it was quite disturbing, especially the timing of it – five hours before a Test match which amounts to a semi-final,” he said.

“I’m literally stunned that allegations like that can be made about this team. I do believe the timing was strategically planned.”

Springboks captain and loose forward Siya Kolisi admitted it had been a challenging week for the squad after the Jantjies controversy.

“We players obviously read a bit what everyone writes and it’s hard. Some players can take it, others find it harder.”

Kolisi said the message to the team had been “just to stick together and tell ourselves that our supporters really just want to see results, what we do on the field.

“We want to win this title, no matter what’s going on around us.”

“Sometimes it’s even three times a week in South Africa. There hasn’t been one positive test since we’ve been together this whole year.”

Springboks have injury woes at flyhalf

With first-choice flyhalf Handre Pollard injured and Jantjies no longer part of the squad, there was concern for the Springboks about an injury to Damian Willemse, who wore the No 10 jersey on Saturday.

“We will assess the injuries in the next two days and then make decisions on whether we have to bring in players next week,” said Nienaber.

“We only arrive in South Africa in the early hours of Monday morning, so it will be a short week for us but both teams will be in the same situation, so we will be on a level playing field.”