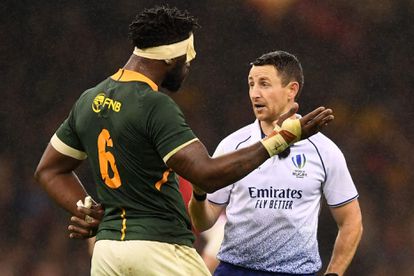 This season’s Rugby Championship has had all the playing elements to be considered among the best editions of the tournament in its history but that has been spoiled by baffling officiating.

Whether they have intended to or not referee’s decisions have clearly impacted results from robbing teams of momentum with bad decisions to failing to allow matches to flow by employing pedantic whistle-work to the breakdown.

What is going on with the referees in the Rugby Championship?

That there is no apparent drive or directive behind the poor officiating makes it worse.

It would be a different matter if referees were rigidly employing some new directive from World Rugby but a lot of the more bizarre calls haven’t had to do with player safety.

In defence of match officials, rugby union is a legislative morass making employing the letter of the law nearly impossible.

Good refereeing is more art than science and officials should be out to provide a flowing contest rather than imposing sanction after sanction and ultimately deciding contests by their whistle. Sadly it seems elite refereeing is suffering a dearth of artistic talent and an over-abundance of thin-skinned egotists.

Respect for match officials is something that rugby has always tried to drum into players from a young age, but it has created a culture where referees aren’t able to take criticism on board.

While everybody loves a gripe about the referee when your team hasn’t done well, the Rugby Championship officiating has been conspicuously poor and ensured that officials are in the spotlight rather than the remarkable talents in each of the four rugby nations that have produced magic moments in this series which is a terrible shame.

Paul Williams’ remarkably poor game has now been overshadowed by performances from officials this weekend and left a bad taste in the mouth.

Title will be decided next weekend

With so much talk about how the Northern Hemisphere are the true force in rugby right now, this Rugby Championship should have been a statement.

The Rugby Championship will be decided in a week’s time and could go to any one of the Springboks, All Blacks or Wallabies after what has been a dramatic tournament but the ‘what ifs’ of previous rounds will detract from whichever side ultimately lifts the trophy.

Efforts must be made to ensure referees understand their role in the professional game and allow these amazing athletes to dazzle rugby fans.