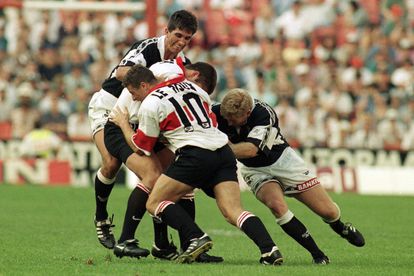 The Currie Cup is a tournament steeped in history and rich in iconography.

Some of the Currie Cup’s stalwarts have undergone major rebranding in the professional era, although these new identities are generally strongly linked to historical roots in the cases of the Bulls and the Lions.

Natal Rugby deliberately underwent a rebranding in the mid-1990s, becoming the Sharks while Free State adopted the moniker of the Cheetahs more organically, but both sides remained true to their unions roots in the design of their jerseys.

Even the Pumas distinctive pink kit draws inspiration from a bygone era and after toying with funky designs for a brief spell, Griquas have also returned to their roots in their Peacock Blue and white striped shirts.

No discussion of iconic rugby jerseys is complete without making mention of Western Province and their famous blue and white hooped jersey.

Does the Currie Cup have rugby’s best kits?