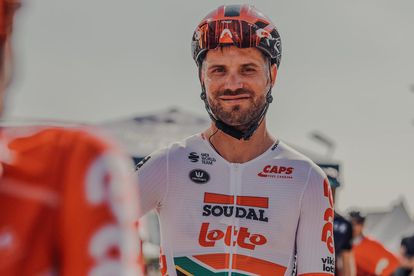 South Africa will have at least one rider in this year’s 109th edition of the Tour de France starting on Friday, 1 July. Photo: Facebook

South Africa will have at least one rider in this year’s 109th edition of the Tour de France starting on Friday, 1 July. Photo: Facebook

South Africa will have at least two riders in this year’s Tour de France peloton for what will be the 109th edition of the famed race starting on Friday, 1 July.

As much was confirmed on Wednesday when Belgium-registered outfit Lotto Soudal confirmed their eight-man line-up.

Philippe Gilbert, Andreas Kron and Tim Wellens will aim for success in the hillier stages.

“With these 8 we can play our part on almost every terrain in this Tour de France”, said CEO John Lelangue about the line-up.

“With Caleb Ewan we have one of the fastest riders of the peloton. He is our biggest chance on a stage win and therefore we have made sure he is well surrounded with Reinardt Janse van Rensburg, Frederik Frison, Florian Vermeersch and Brent Van Moer.

“Those last two will also definitely have highlighted the cobbled stage to Arenberg.

Furthermore, Philippe Gilbert, Andreas Kron and Tim Wellens have proven the last weeks to be in a very good shape. They will definitely be active in the more difficult stages and be present in breakaways.”

Later on Wednesday it was confirmed – as reported by The South African website – that South African veteran cyclist Daryl Impey would also be taking part in this year’s race having been included alongside four-time winner Chris Froome in the Israel-Premier Tech team.

Mzansi could have a third Tour de France rider

He has competed in five previous Tour de France races between 2015 and 2019 while representing the Qhubeka team.

Although unconfirmed at the time of publishing, South Africa is likely to have a third Tour de France rider this year in Louis Meintjes representing the Intermarché-Wanty-Gobert Matériaux team.

The 2022 Tour de France will start with a 13km individual time trial in Copenhagen and will conclude some 3 328km later on the Champs-Elysees in Paris on Sunday, 24 July.