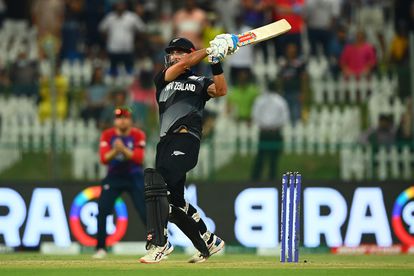 Chasing 167, the Black Caps were on the back foot when key duo Martin Guptill and Kane Williamson were dismissed by Chris Woakes inside the first three overs of the reply.

But the ship was steadied by Mitchell and Devon Conway, who added 82 for the third wicket, before Jimmy Neesham blasted 26 from 10 to turn the tide in his side’s favour.

And Mitchell was on hand to hit the winning runs from the final ball of the 19th over, finishing with 72 from 47 as Williamson’s men gained revenge for their dramatic 2019 Cricket World Cup final defeat against the same opponents.

Moeen Ali’s unbeaten 51 had earlier propelled England to 166 for four and though Liam Livingstone (2/22) impressed with the ball, their ambitions of becoming the first men’s team to hold both ICC World Cups at once are now over.

England were put in and new-look opening pair Jonny Bairstow and Jos Buttler were given a thorough test early on as New Zealand’s seamers probed with the new ball.

Buttler got into his stride with back-to-back boundaries off Trent Boult but lost his partner following the introduction of Adam Milne, whose first delivery was chipped by Bairstow to a diving Williamson at mid-off.

England had been flying starters with the bat in the Super 12s but reached the end of the powerplay here on 40 for one, at which point Williamson turned to spin to keep the squeeze on.

Buttler released some of the pressure with a reverse swept boundary off Mitchell Santner but the same shot brought his downfall as he was struck on the knee roll by Ish Sodhi and departed for 29.

Moeen keeps England in it

That brought Moeen and Dawid Malan together and the latter benefited from a let-off on ten when Conway put down a tough low chance to his left off Neesham.

Malan responded by unfurling a glorious cover drive to take England to the halfway stage in style and went inside out through the same region twice in three balls against Glenn Phillips as the run rate ticked above seven.

Moeen was equally quick to punish anything loose, cutting Sodhi to the point boundary before working Boult through fine leg to leave the innings delicately poised on 110 for two after 15.

England’s momentum was checked when Malan feathered an edge behind the ball after pulling Tim Southee for the first six of the match but his departure saw Moeen step on the accelerator, with Sodhi and Milne deposited into the stands.

New man Liam Livingstone did not take long to find his range, launching Milne for an 88-metre straight six in an 18th over costing 16, though he couldn’t muster the same power off Neesham and picked out Santner at long-off.

Moeen brought up his 36-ball half-century later in the final over which ended with Morgan dropped by an off-balance Phillips in the deep as England set the Black Caps 167 to win.

The total appeared about par but any hopes New Zealand had of making quick inroads were quickly dashed as Morgan’s men – and specifically Woakes – made a dream start with the ball.

The reply was just three balls old when Guptill, who had struck his first delivery for four, saw a leading edge easily taken by Moeen at mid-on.

And Woakes’s work was not done there as he went on to claim the huge early scalp of Williamson, whose attempted scoop did not have the legs to clear Adil Rashid at short fine leg to leave New Zealand 13 for two.

Mitchell and Conway were tasked with repairing the damage and began to pick up valuable boundaries as they negotiated the remainder of a powerplay which was brought to a close by an excellent cover drive by Conway.

Just 14 runs came between the sixth and ninth overs, though Conway released the shackles by lofting Livingstone down the ground for a much-needed boundary as the required rate neared 11.

He followed up by flaying Mark Wood over backward point for a remarkable six and Mitchell soon cleared the ropes himself – despite a magnificent effort by Chris Jordan on the long-off boundary – as the pair continued to keep Black Caps dreams alive.

Enter Livingstone, who struck twice in quick succession as Conway was stumped for 46 and Phillips picked out Sam Billings on the long-off boundary to leave New Zealand needing 57 from the final four overs.

But the pendulum swung towards the Black Caps during a dramatic 17th over as Neesham ran riot.

Two sixes off Chris Jordan, the second of which saw Bairstow’s knee land on the rope just before he released the ball to Livingstone, contributed to 23 runs in all and there was no let-up when Rashid returned.

Neesham and Mitchell both slammed maximums, the latter bringing up his half century in the process, though the game took another twist when the former couldn’t clear Morgan at cover to leave 20 runs needed from the final two overs.

They needed just one to complete the job, however, as successive Mitchell sixes took the target into single figures before a boundary behind square leg allowed the celebrations to begin.

New Zealand will now take on either Australia and Pakistan in Sunday’s final as they look to add T20 glory to their ICC World Test Championship crown.