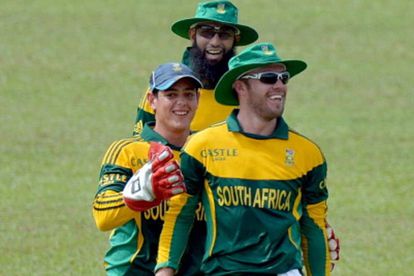 Finally, we have a solution on where to put Hashim Amla, Quinton de Kock and AB de Villiers in the T20 batting order.

Just shove them all in the top order. Simple as that.

The build-up for the Proteas to this year’s World T20 seemed all about overcomplicating where to put three star batsmen, trying to make it into a problem of overcrowding that should never have been there in the first place.

It all just made a mountain out of a molehill, or a Rubik’s Cube out of a low level Tetris setting.

All the cloudy thinking started with the idea that Hashim Amla, for all his experience and wristy loveliness, might just bat a little too slowly to keep up with the hellzapoppin’ run rates that’s all the rage these days.

Well, his 97 off 62 balls in the Proteas’ last T20 put that thinking in its place. He might not smash it out of the ground, but run rates don’t discriminate.

Until they start awarding extra runs for distance that sixes travel (an inevitable progression, of course), Amla can stay just where he is.

So, Amla’s place became secure. So did Quinton de Kock’s place as he kept the runs flowing. Also, de Kock puts an important end to the long term plan of making many short term plans with AB de Villiers’ wicket-keeping.

De Villiers must just stay put and keep pulling off the indescribable indescribably. He may have a modest T20 record for South Africa, but that’s surely an anomaly. That, or international T20 cricket is beneath him. A distinct possibility.

Is Faf du Plessis batting at three still non-negotiable? After all, he pulls off more of a floating role with good success in the IPL.

Ag, as long as the captain doesn’t take up too many AB balls, the Proteas will be fine.

Don’t concern yourself too much with the other combinations. Just look at the pitch and pick the obvious.

Raging turner? Pick all the spinners. Bit of grass? Pick more seamers. Belter? Just load it with all the batsmen and back it up with all the all-rounders. Who cares who’s actually bowling if they’re all going at 14 an over?

That last option might be the way to go for the Proteas’ first World T20 game in Mumbai. England’s first game there showed that if you lose the toss and bowl second, the dew will render any bowler into a glorified bowling machine stuck on the ‘random pies’ setting.

All will be fine as long as the Proteas get all their most talented batsmen to face the majority of the bowling and score more runs than is physically possible for the mere mortal opposition to beat. Simple as that.

So we enter another ICC tournament for the Proteas. What could possibly go wrong?

Live on: SuperSport 2 and SABC