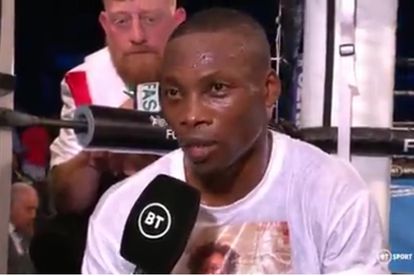 The 34-year-old boxer has now improved his record to 30 wins, which include 23 knockouts, while he has suffered four defeats in his boxing career.

Tete was extremely excited with his latest achievement, and he admitted that he went into the bout confident of winning it.

Furthermore, Tete added that he didn’t mean any of the words he uttered towards Cunningham before the bout, saying talking is just the nature of the sport.

“Firstly, I would like to thank God for giving me this victory and also thank everyone who came to support myself and Jason. I want to thank my promoter Mr Warren. I was so confident coming to this fight cause I wanted to win it so bad,” said Tete to BT Sport.

“Coming from the loss of my mother and the loss of not fighting for about two-years you know things were so difficult for myself back at home that is why I came with so much anger, not the fact that I don’t like Jason or what, I may have been brutal to him verbally but you know it’s just the sport of Boxing we talk, but I didn’t mean anything for him to be hurt so badly.

“I just want to thank him for giving me this opportunity because he was the champion and he proved himself that he is a champion because was very good, he’s got quick movement, he was doing so well,” said Tete.