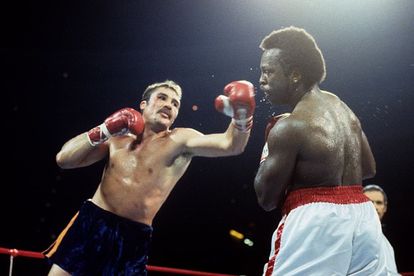 More than 130 South African boxers have held world championships, but only four heavyweights from our country have captured a globally sanctioned strap.

In 1983, Gerrie Coetzee became the first South African to win a Heavyweight title in what was his fourth title fight.

Coetzee was not expected to get one over on the Don King-Promoted Michael Dokes, but he dominated the fight before scoring a tenth-round knockout.

The knockout punch might have dealt more damage to Coetzee than to Dokes with the South African bruiser requiring surgery and struggling with the injured hand for years.

Coetzee lost the title in a controversial knockout defeat to Greg Page at Sun City a year later.

‘The Sniper’ won the WBO heavyweight title in 2003 after knocking out Wladimir Klitschko in two rounds, in a massive upset. He would vacate the title in a bid to claim the WBC title off of Vitali Klitschko but fell short in his bid to be a triple world champion.

In 1997 he had beaten Ross Puritty at the Carousel Casino in Hammanskraal to win the WBU title which he defended in fights against Bobby Czyz, Jorge Valdes and Al Cole before dropping the belt to Hasim Rahman in Atlantic City in 2000.

Also a renowned kickboxer Bernardo made his professional boxing debut on 28 February 1993, against countryman Delius Musemwa, scoring a second-round knockout.

Bernardo won the vacant WBF title against Dan Jerling by knocking out the Czechoslovakian fighter in the sixth round in Szekszárd, Hungary.

In his only defence of the title, Bernardo knocked out American Peter McNeely in just 41 seconds. In May 2002 he was stripped of the title for failure to defend the belt.

Botha had returned to boxing two years earlier with a unanimous decision victory over Bob Mirovic.

It was the second time that Botha had won a world title fight but his victory in 1995 against Germany’s Axel Schulz to win the IBF heavyweight Championship was declared a no contest retrospectively after the fighter tested positive for nandrolone.