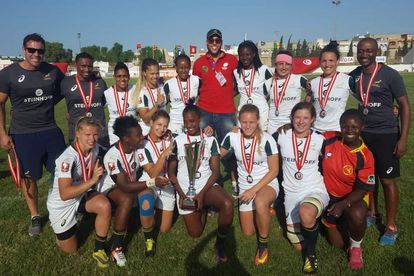 The Springbok Women’s Sevens on Sunday booked their place in the Rugby World Cup Sevens, which will be hosted in San Francisco in July 2018. They defeated Kenya 17-12 in the final of the Rugby Africa Sevens in Tunisia.

Coach Renfred Dazel’s team entered the second day’s play unbeaten and high on confidence following victories against Morocco, Tunisia and Uganda on Saturday, and they continued this fine form in the final stages as they scored 87 points and conceded only 12.

The team cruised to a 43-0 victory against Senegal in the Cup quarter-final as they showed intent on attack and did well to shut out the opposition on defence, which earned them a semi-final berth against Uganda.

Once again Dazel’s team made easy work of it as they powered their way to a 27-0 victory and a place in the final against arch-rivals Kenya.

As expected, Dazel’s charges were made to work hard for the victory as Kenya – who have put up a good fight against the Springbok Women’s Sevens in the last few seasons – showed commitment on attack and defence. But the Bok Women’s Sevens’ held on for a narrow 17-12 victory to defend their title and book their place in the Rugby World Cup Sevens.

Their qualification for the international spectacle capped off a rewarding tournament for the team as they scored a total of 171 points and conceded 19 in their six matches.