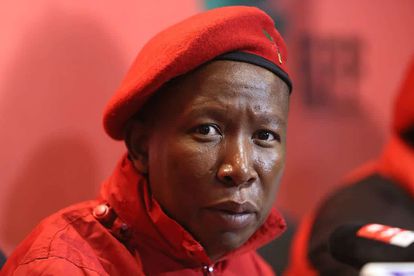 The leader of the Economic Freedom Fighters (EFF) Julius Malema has launched a scathing attack on Deputy Chief Justice (DCJ) Raymond Zondo, after he reprimanded Dali Mpofu for his so-called “outburst” at the State Capture Commission. Malema claims Zondo was actually told to read Mpofu the riot act, implying that he receives undue instructions from external forces.

The leader of the red berets has come to the defence of Mpofu – a fierce supporter and former MP of the party. Mpofu caught fire at the commission, when he told Public Enterprises Minister Pravin Gordhan’s lawyer to “shut up.”

Mpofu was cross-examining Gordhan, on behalf of his client, former SARS commissioner Tom Moyane, at the state capture commission. He will now be investigated for his utterances and given an opportunity to defend himself.

Malema, who has accused Zondo of going easy on Gordhan, claims the chairperson is aligned to that faction.

“The faction told Zondo at night. You can see he was told, ‘You didn’t deal with the matter decisively. You have to put him in his place’. Zondo is not our god. Zondo is a human being also with stories of being irresponsible. So he must never come here and want to behave like our god. We established that commission and it’s not property of Zondo”

Malema: Zondo is a factionalist

“When Dali Mpofu refuses to be undermined by a white woman and says to her, she must shut up, we are told for the first time by Zondo that he is in charge. He couldn’t say that to a white man but when Dali challenges a white madam, Zondo tries to impress whiteness,” Malema said.

“Instead of telling the lady to sit down, Zondo tells Dali to sit down”

Malema has also labelled Zondo as a factionalist.

“It does not mean we should stay away from it. The guy worships Pravin Gordhan you can see he is in factional boundaries. He is very scared of white people,” he said.

“Zondo is not our god, we are not going to be scared of judicial dictatorship. Zondo is factional. We fought for that commission. It is not what we envisioned, we envisioned a commission that will hold the Guptas and Rupert accountable.”