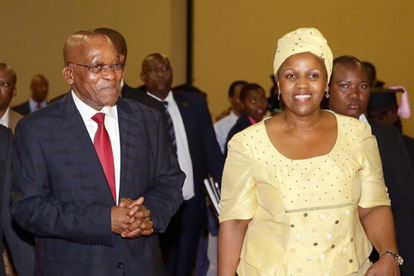 Myeni stands accused of facilitating corruption and influencing the former head of state to favour the controversial company.

The report established that late Bosasa boss Gavin Watson had gifted Myeni with the bag containing the bribe, with Watson telling Angelo Agrizzi that Myeni had been over the moon.

Bosasa won R2.3 billion in tenders between 2000 and 2016, paying out R75 million in order to bribe politicians and government officials.

Myeni’s own appearance before the Inquiry was troubling, with the politician opting to remain silent rather than incriminate herself. Nevertheless, Zondo has drawn his own conclusions.

The Commission confirmed Agrizzi’s testimony that Myeni had received regular R300 000 payments, allegedly for Zuma’s Foundation. The ex-COO said that he assumed the payments were ultimately being funnelled into the ex-president’s pockets.

The funds were paid exclusively in cash with investigators finding cash deposit slips with a signature resembling Myeni’s confirming huge payments into the Foundation’s account.

The company also installed security systems at Myeni’s private residence in addition to sponsoring numerous Foundation birthday celebrations for the former president. These parties are valued at R3.5 million. The Zuma Foundation chairperson’s own thank-you note to Bosasa was used to confirm this.

Additionally, Agrizzi had testified to witnessing three payments made to Myeni. The ex-COO explained that the politician was viewed as powerful and a valuable ally when it came to securing lucrative contracts.

Watson repeatedly attended meetings set up by Myeni with Zuma at his Nkandla homestead. During one of these meetings the Bosasa head mentioned a Hawks investigation that his company was facing. Zuma allegedly made a ‘call or two’ after promising Watson he would intervene.

Back in 2015, Agrizzi and Watson had met with Myeni at a Pretoria hotel where she had booked a suite. During the meeting, Myeni said she was arranging for the National Prosecuting Authority to drop the case against Bosasa. The police docket was pulled out of Myeni’s bad and Agrizzi had photographed the files. Agrizzi claimed that Myeni had been nervous during the exchange.

These photographs would later prove problematic for the Zuma Foundation chairperson. An Inquiry investigator visited the same hotel, confirming her stay there and that the docket had indeed been taken in her suite.

“The investigation and prosecution were, indeed, successfully brought to a halt,”

Zuma believed to have been under Myeni’s influence

Zondo says that the former SAA politician had immense influence over Zuma and had used this to facilitate meetings with an oil company, Falcon Oil and Gas.

The company sought to have Zuma pressurise Minister Resources Minister at the time, Ngoako Ramatlhodi to pass regulations aimed at easing its ability to frack in the Karoo. The minister is believed to have been fired by Zuma for failing to cave to these kinds of requests.

The Inquiry found that Myeni indirectly helped Bosasa to be irregularly awarded tenders by halting investigations into corruption, ultimately breaching both the Constitution and anti-corruption laws. In conclusion, Myeni has emerged as a key participant in state capture in this instalment of the report.