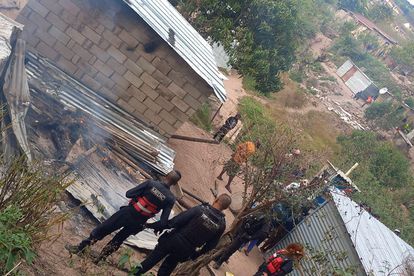 A Zimbabwean national reportedly committed suicide by setting his house alight while he was inside. Image: RUSA.

A Zimbabwean national reportedly committed suicide by setting his house alight while he was inside. Image: RUSA.

Charred remains of a 24-year-old Zimbabwean national were recovered in his gutted home which he allegedly set alight after hosting a party for members of the community in Thandanani, Verulam in KwaZulu-Natal.

According to private security, Reaction Unit South Africa (RUSA), the deceased’s neighbours contacted them at approximately 09:41 after the man’s wood and iron home burst into flames with him inside.

RUSA members were immediately dispatched and on arrival discovered the home completely guttered. The charred remains of the self employed tiler were discovered in the debris.

RUSA spokesperson, Prem Balram said according to the man’s intoxicated girlfriend, the deceased purchased a large amount of meat and alcohol to host a braai on Friday afternoon. He reportedly partied throughout the night with members of his community and his girlfriend.

Balram further said that when the man returned home on Saturday morning he discovered his girlfriend in his bed.

ALSO READ: Male prostitute and client head to court over payment for services

“He informed her that he loved her and asked her to leave as he intended on ending his life. He then forced her out of the residence and locked the door. The informal home thereafter burst into flames.

“The deceased could be heard screaming for several minutes before the structure collapsed. The motive for the suicide was not immediately established.”

Wait, what? Durban pupil ‘pays’ taxi driver with her G-string