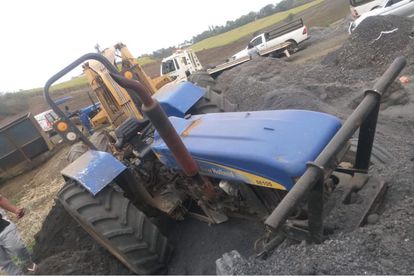 A farm worker was crushed by a tractor in Tongaat, KZN. Image: RUSA.

A farm worker was crushed by a tractor in Tongaat, KZN. Image: RUSA.

A farm worker was reportedly killed after he was ejected from a tractor and crushed under the rear wheel while travelling on an unpaved road off Walter Reid Road in Maidstone in Tongaat, KwaZulu-Natal on Saturday afternoon.

According to private security, Reaction Unit South Africa (RUSA), its members arrived on scene at approximately 16:49 and found Emergency Services in attendance.

Spokesperson Prem Balram said the body of the deceased was located under the rear tyre of a tractor and fire fighters lifted the tractor with the use of a pneumatic bag and removed him.

“It was established that the man was towing a trailer loaded with a front end tractor. At some point, the driver was ejected and landed in front of the tractor which rolled onto him trapping him under the rear tyre. The identity of the deceased has been established.”

In a separate incident, a three-year-old was struck by a tractor on a farm in July this year. The incident happened on farmland off Bentley Hall Road in Bury, Greater Manchester.

According to police enquiries from Bury CID alongside colleagues at the Health and Safety Executive are ongoing with the tractor driver reportedly helping with the investigation.

Litlle Albie was pronounced dead by paramedics before he could be taken for treatment after they had stopped on Rochdale Old Road.