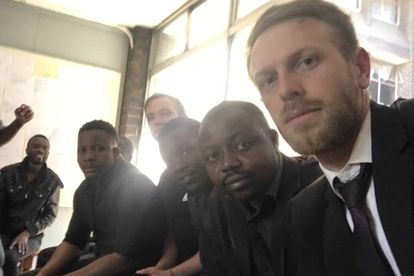 Lawyer Doug Coltart (far right) with some of the teachers at Harare police station after being arrested during a protest. Photo: Doug Coltart / Twitter.

Lawyer Doug Coltart (far right) with some of the teachers at Harare police station after being arrested during a protest. Photo: Doug Coltart / Twitter.

Zimbabwe union leaders trying to petition on Friday outside the finance ministry for higher wages as well as to inform government they intend to embark on a mass stay away until their salary matter was resolved, have been arrested, along with a journalist and a lawyer.

Members of the Amalgamated Rural Teachers Union of Zimbabwe were detained alongside their lawyer Douglas Coltart, as well as local reporter Leopold Munhende.

A petition was to be delivered to the Zimbabwe’s finance minister, Mthuli Ncube.

Reason for the rising number of arrests in Zimbabwe

The arrests are widely viewed as a crackdown by the embattled ZANU-PF, which has been heavy-handed against any form of dissent as Zimbabwe grapples with a swiftly deteriorating local economy.

The union distributed an invite to all teachers to attend the petition handover, which read: “Pay Day Funeral. Wear black to mourn the death of our salaries”.

News of the arrests soon circulated on social media, resulting in an assortment of local lawyers descending on the Harare Central Police Station in a bid to have those detained released.

Grateful for response from the legal profession. All these lawyers (& others who weren’t in the pic) are here at Harare Central attending to our arrest. Also those arrested is a journalist Leopold Munhende who was covering the picket. Why arrest professionals doing our jobs? pic.twitter.com/KNI2ucsmfr

Images circulated online showed markings on Coltart’s body believed to be the result of assault by the Zimbabwe police.

The events of the last few weeks in #Zimbabwe with the brutal crackdown on peaceful protestors is evidence of the Mnangagwa regime’s weakness not strength. Its facade of being reformist has gone for ever. Those campaigning for freedom are getting stronger and will prevail. pic.twitter.com/1LxtKT056O

Contents of the petition

The petition, signed by the union’s secretary-general Robson Chere, said Zimbabwe teachers were living in abject poverty because of the slashing of salaries from around $500 to the current $38.

This affected the ability to deliver quality teaching services, said the petition, which was exacerbated by prices of services offered by government [having] increased by up to 500%.

The petition said the teachers were disgusted with the stinking appetite for executive luxuries by the ruling elites and the insincere negotiations held under the banner of the National Joint Negotiated Council (NJNC).

“Failure to restore the value of our salaries spells doom for our education sector. Our members will not be resuming their duties at the opening of the third term,” said Chere.