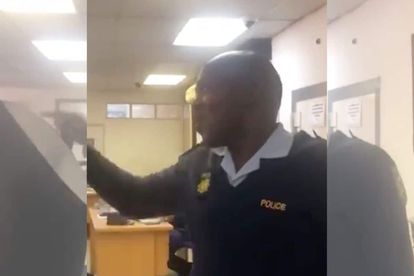 In a video posted to Twitter on Saturday 29 February, a woman can be seen shouting at police, believed to be in the Lenasia police station in Gauteng.

The caption of the video said that the woman was apparently shouting at them because they [police] refused to open a case after her house had been burgled.

In the video, police can be seen smirking, not paying much attention to the woman, however, we will never know what might have taken place before the video was taken.

At the end of the video, a police officer eventually takes the phone away from the woman.

What can be seen in the video

Right off the bat, you can hear a woman shouting in what appears to be a police station.

Up to seven police officers can be seen in the office, behind the counter, doing work, looking at documents and talking quietly among themselves as though the woman was invisible. Whether they were intentionally ignoring her is not known.

“This man sitting over here with the glasses doesn’t want to open a case for me,” said the woman.

The lady then moves around the office and finds another officer at the counter, she asks if he can give her the name of the officer said to be refusing her. The police officer, smiling, tells her to go behind the counter and go speak to him. When she keeps persisting, the woman eventually walks off to find another police officer.

She asks: “Can you please give me the name of the man sitting there by the desk?”

The man gets upset and takes the phone out of her hands. It is then that she really starts screaming.

Many Twitter users seemed to side with the police, saying that the woman’s actions were totally unnecessary.

“If you go to a police station with such a silly attitude, that’s what you get Abramjee, she deserved it!!! To hell with her very very stinging attitude towards black people, shouting towards people like a lunatic,” the Twitter user said.

Another Twitter user, also a journalist said: “It might be because I am a journalist, but I’ve always received good service from the Lenasia police station. This video is also only the woman’s version of the incident. I wonder what the police version is. Let’s not be quick to judge before we understand what actually happened,” he said.

Other Twitter users sided with the woman saying police are negligent.

“The lady must have been traumatised from the incident. She probably asked in a nice way first. But it’s the authorities who should have helped her. The cop laughing little wonder crime is taking over. The attitude of some cops is stinking,” they said.

“But what if she did approach them nicely… And they refused… I’ve been through the situation before myself… Maybe she resorted to this eventually… But we’ll never know, will we?… Just saying,” said another.