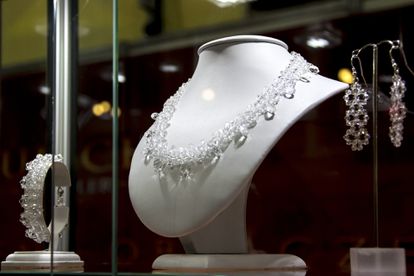 A jewellery store in Witbank was robbed by armed suspects on Monday. Image: Pixabay.

A jewellery store in Witbank was robbed by armed suspects on Monday. Image: Pixabay.

Classic Jewellery store in Klipfontein, Witbank was ransacked by an armed gang on Monday, 14 November. Some of the alleged suspects were nabbed by the Tactical Response Team (TRT), also known as ‘Amaberete’ – the nickname is a reference to the berets worn by members.

“On the said day around 15:15, it is said that a man came to the said shop where he reportedly pretended as a customer who was interested in purchasing some jewellery items,” said Mohlala.

Once the shop assistant allowed the first suspect into the store, he drew a gun and told the employee to let his accomplices in.

The group of robbers then proceeded to help themselves to several pieces of jewellery before fleeing the scene in various vehicles.

One of these vehicles, a Toyota Yaris, was spotted in Duvha Park, Witbank, shortly after the incident was reported to the police.

“The vehicle was cornered and a shootout ensued between the suspects and the Police. In the end, that was when the five were nabbed and a pistol with ammunition was reportedly found in their possession,” said the police spokesperson.

The vehicle was confiscated as it may have been used in the commission of an offence and the firearm was sent for ballistic testing to determine if has been used in crimes elsewhere.

The five arrested suspects are expected to appear before the Emalahleni Magistrate’s Court on Wednesday, 16 November, on charges of possession of an unlicensed firearm and ammunition and they may be linked to the jewellery store heist.

“Police at this point cannot rule out the possibility of adding more charges against the suspects as the investigation continues. The other remaining suspects are still at large and police are still in pursuit of them,” said Mohlala.

Members of the public with information about the incident or suspects who remain at large are encouraged to contact the police via the Crime Stop hotline at 08600-10111.