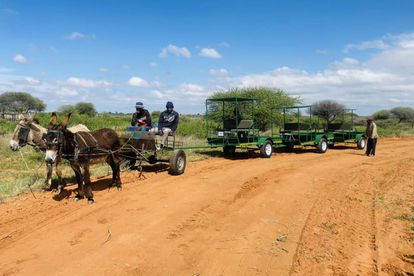 It has not been a full month since the ceremonious handover of R780 000 priced donkey-drawn carts but some have apparently started breaking down.

IOL has reported that some donkey carts handed over to the North West community broke down after a single use.

One of the affected recipients has even resorted to going back to using his old donkey cart from 2011 which he paid R1 800 for, according to Sunday Times.

SERVICE OPTION FOR THOSE BREAKING DOWN

Although disappointing to show defects so soon, part of the procurement agreement by the North West Department of Community Safety and Transport Management was that the supplier would service the carts inclusive of the R780 000 purchase agreement.

“The agreement as the per contract with the company that won the bid (LKT BUSINESS ENTERPRISE) is to maintain and fix the carts for the next three years at no cost to either the owners nor the Department. The twenty carts were procured for a total of R 780 000. The 2 seater is R32 500 each and the 4 seater is R45 500,” the department clarified.

WHY THE PROCUREMENT WAS COMPLETED

The investment in the carts was in line with the National Land Transport Act, NLTA which seeks to alleviate challenges faced by rural communities.

“This was in line with Rural Transport Strategy (2016 p 37 and 38) on the Transport Policies and Strategies recommendation and support of the use of Non-Motorised Transport as a sustainable mode in rural areas.”

So far three donkey-drawn carts have broken down out of the 20 that were purchased for a staggering R780 000 .

Reacting to this project, Marinus Du Preez said: “Once again the ANC managed to waste our hard-earned tax money, and some other cadre is driving a brand new colonial German vehicle and moving into a multimillion-rand house. The only thing the ANC is good at is corruption”.