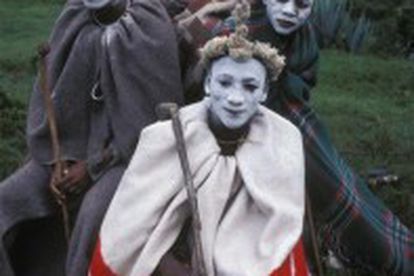 A white South African teenager from the Eastern Cape has volunteered to undergo the traditional Xhosa circumcision ceremony as a sign of support for his black friend.

Brandon de Wet (17) joined his friend of 13 years, Yanelisa Somyo, to take in the full experience of this Xhosa tradition, joining an initiation school in the Eastern Cape.

Boys between 13 and 17 typically attend the ritual ceremony over school holidays, during which time they travel to remote mountainside camps or schools (mostly located in the Transkei), where they live in a community together and join secret rituals before and after undergoing the circumcision, which is performed without any anaesthetic.

A traditional healer called “the ingcibi” performs the operation during a prolonged ceremony, which is shrouded in mystery. Only men are allowed to ever enter the camps during the month-long procedure and are sworn into secrecy upon return. The coming-of-age ritual is common in traditional Xhosa and Ndebele tribes and counts among the ethnic tribal signatures, especially in the Eastern Cape.

De Wet said that he chose to partake in the ritual to gain a better understanding of his friend’s culture, adding that he experienced “a hero’s welcome” when they returned. His case is believed to be the first report of a white South African undergoing a circumcision performed as part of the traditional Xhosa ritual. De Wet said that sharing this journey into manhood (as the rite of passage is widely regarded among members of Xhosa clans) strengthened the friendship between him and Somyo.

De Wet’s parents initially did not want to support his decision due to frequent reports of complications after botched circumcisions, which can result in septic wounds, gangrene, penis amputations or even death. But they eventually gave in after researching the particular initiation school that he and Somyo were going to attend and speaking to Somyo’s parents.

Circumcision is rising in popularity among other ethnic communities in South Africa on account of statistical data stating that HIV infections and other sexually transmitted infections occur less frequently in circumcised males. Zulu King Goodwill Zwelithini has spoken out in favour of the practice citing these health reasons despite the fact that Zulu King Shaka had explicitly prohibited the practice in the 19th century.

This year 30 initiates have died  from circumcision-related injuries and nearly 300 have been hospitalised in the Eastern Cape. Many continue to campaign against the procedure of male circumcision, advocating safer sex instead. For Brandon De Wet and Yanelisa Somyo, however, the road to manhood has been paved – give or take an inch.