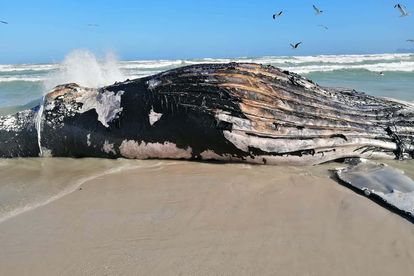 Capetonians thinking of taking to the water around the False Bay area, and particularly in the vicinity of Strandfontein, have been urged to exercise caution over the next few days.

This after a large humpback whale carcass washed up on Strandfontein beach on Saturday afternoon. The dead mammal is estimated to be 10-12 metres long.

Craig Lambinon, spokesperson for the National Sea Rescue Institute (NSRI), advised swimmers and surfers along the False Bay coastline to be cautious as the carcass could attract sharks.

Carcass will be removed soon

Lambinon added that arrangements to remove the carcass over the next day or two were being made by the City of Cape Town’s waste disposal management.

People in the area began noticing the whale at around 2pm several reported that it was already dead when it washed ashore.

“[I] saw some pieces that have broken off,” said another Facebook poster, Yusuf Adams. He added that that water would be too shallow for sharks to reach the whale, except perhaps at high tide.

According to the Weekend Argus, adult humpback whales can measure up to 16 metres and weigh up to 30 tons. Sightings of the mammal between May and November are common as they migrate from the polar region up the Southern African coastline to their breeding grounds near Mozambique.

This is not the first time that a whale has washed ashore in the Strandfontein area. In March 2017, city officials removed a carcass and the NSRI was placed on standby to assist.