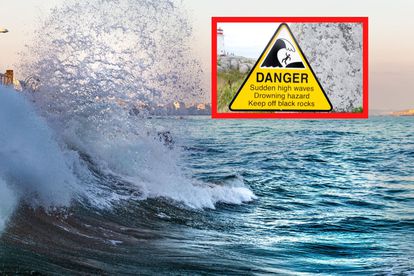 WEATHER WARNING: Waves of up to 5m expected in these areas Photos: Stock/Canva

WEATHER WARNING: Waves of up to 5m expected in these areas Photos: Stock/Canva

A weather warning was issued by the South African Weather Service (SAWS) for waves of up to 5metres in several parts of the country.

This prediction is mostly for the Western Cape coast.

The SAWS warned that difficulty in navigation at sea for small vessels and personal watercraft is likely and might lead to small vessels capsizing in the locality.

The warning is issued from Thursday to Sunday evening.

HERE ARE THE AREAS THAT WILL BE AFFECTED:

“The time of concern will be mainly near high tide on Friday and Saturday. Coastal users are at risk of being swept away from low-lying areas by infrequent, large waves.

“Localised disruptions to beachfront activities can also be expected.”

Small vessels are advised to seek shelter in harbours, bays, or inlets.

HERE ARE SOME EMERGENCY NUMBERS:

If you or a loved one end up in trouble these are the number you would want to contact: