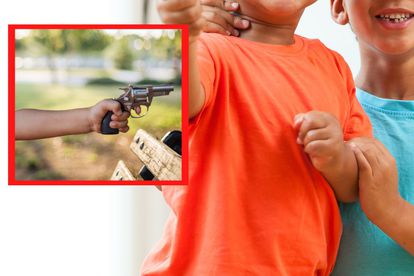 Police said the six-year-old boy accidentally shot his little sister in the head with a .38 revolver at home on Thursday.

THE SIX-YEAR-OLD BOY SHOT AND KILLED HIS SISTER

The five-year-old sister was rushed to a nearby hospital, but unfortunately, she passed away in hospital.

According to police spokesperson Colonel Priscilla Naidu, on police arrival, the firearm was allegedly removed.

“SAPS Bethelsdorp detectives have opened a case of defeating the ends of justice following a shooting incident where it is alleged that a six-year-old boy accidentally shot his five-year-old sister on Thursday afternoon in Bethelsdorp.”

Naidu said it is alleged that between 13:00-14:00, three children, two boys aged six years old and a little sister, were playing with a firearm in the room at a house in Extension 31 when a shot went off.

ON POLICE ARRIVAL, THE FIREARM WAS REMOVED AND COULD NOT BE FOUND

“It is further alleged that one of the six-year-old boys accidentally shot his little sister in the head with a .38 revolver. The critically injured girl was taken to the hospital by ambulance.

“Sadly, the five-year-old girl passed away last night in hospital. A case of culpable homicide will be added to the defeating the ends of the justice case.”

On police arrival, the firearm was allegedly removed and could not be found.

“A charge of defeating the ends of justice is opened for further investigation. More charges may be added and arrests affected as the investigation unfolds.”

ALSO READ: Six-year-old boy falls from the 11th floor to his death

If you decide to keep guns in the home, be aware that many studies show that teaching kids about gun safety or not touching a firearm if they find one is not enough. You can reduce the chances of children being injured, however, by following important safety rules:

Children who are generally considered too young to be allowed to handle firearms at all can be taught a different set of rules: