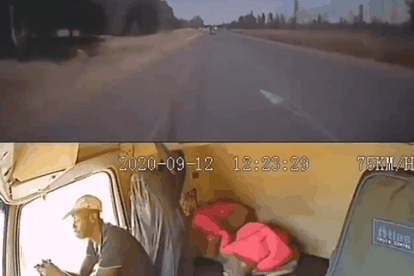 How many times does it have to be said? How many incidents like this need to go viral? And, more importantly, how many lives will have to be lost before all motorists understand that you cannot use your phone while driving? This latest clip – uploaded to Twitter on Tuesday – shows how a ‘texting trucker’ lost control of his vehicle in Gauteng.

Approaching speeds of over 80km while heading into a busy intersection, the driver on the dashcam can be seen resting on his steering wheel, giving his full attention to a mobile device. But for the occasional glance at the road, the reckless road user is transfixed by his screen, breaking several traffic laws in the process.

Relying on his instincts turned out to be a terrible idea, too. Racing towards the junction, the driver failed to spot another truck ahead. With just a second to react, the offender tries to steer himself to safety – but only ended up smashing into the side of another bewildered trucker.

The incident took place on Saturday, just before 12:30. No fatalities or serious injuries have been reported, but the driver’s professional future remains unclear. The disregard exhibited here for other road users has left many social media users outraged, and after amassing 30 000 views in one day, the reaction has been nothing short of fierce:

The speed is the scariest part – had he hit a smaller car, he would have killed people at that speed!

Not only was he texting and driving, but he was also speeding, and not wearing a seatbelt.