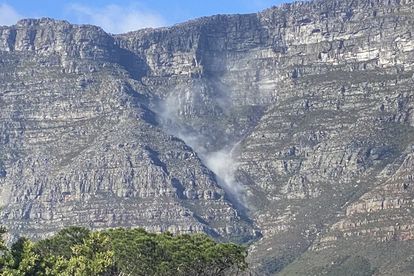 Power utility Eskom confirmed that a combination of Stage 1 and Stage 2 load shedding will be in place until further notice. Photo: Twitter

Power utility Eskom confirmed that a combination of Stage 1 and Stage 2 load shedding will be in place until further notice. Photo: Twitter

With everything else going to hell in a handbasket this week, it’s perhaps only logical that, if Table Mountain was to fall apart, now would be the best time for it to happen. Several local residents were able to film the moment that a significant rockfall took place at the iconic venue, as a boulder rolled down the instantly recognisable cliff-face.

The incident, believed to have occurred near the Silverstream area of the landmark, took place on Tuesday morning. A huge puff of dust was created by the alleged rockfall, and the official Table Mountain Watch issued the following warning:

“Safety Alert: You may want to be careful in the Silverstream area on TM at the moment. This is due to slope instability. Videos of the incident have been doing the rounds this morning.”

We are still awaiting confirmation from SANParks on what exactly happened here, and those who frequent the reserve are desperate to know if popular hiking routes and busy tourist spots are safe from any further rockfalls. No casualties have yet been reported from this runaway boulder, but it sure makes for a stunning and dramatic scene.

Watch: Rockfall at Table Mountain – from every angle

Did anyone else see those giant boulders falling down Table Mountain? pic.twitter.com/7WmVsArY8Q

Safety Alert: Be careful hiking, scrambling or climbing in the Silverstream area on Table Mountain

Looting, riots, and now this…

With riots crippling operations in both KZN and Gauteng, Twitter users conflated these events with the rockfall incident. In times like these, you’re never left waiting too long for that dark South African sense of humour to kick in.