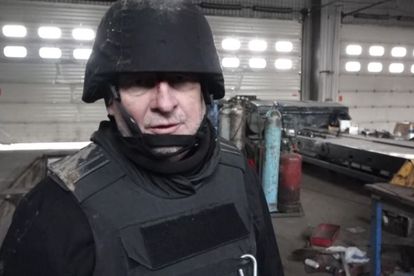 WHAT HAPPENED WHEN THE NEWS CREW WERE ATTACKED?

Stuart Ramsay, chief correspondent at Sky News, was hit by a bullet in the lower back on Monday as they drove towards the Ukrainian capital.

A Russian saboteur reconnaissance squad is suspected of carrying out the attack, Sky News said.

IT ALL STARTED WITH A SMALL EXPLOSION THAT COULD BE HEARD

He said out of nowhere a small explosion could be heard.

“I saw something hit the car and a tyre burst. We rolled to a stop. And then our world turned upside down.

“The first round cracked the windscreen. Camera operator Richie Mockler huddled into the front passenger footwell. Then we were under full attack.

“Bullets cascaded through the whole of the car, tracers, bullet flashes, windscreen glass, plastic seats, the steering wheel, and dashboard had disintegrated,” Ramsey said as he recalled the incident.

He said they didn’t know it at the time but were later told by the Ukrainians that they were being ambushed by a saboteur Russian reconnaissance squad.

“It was professional, the rounds kept smashing into the car – they didn’t miss.”

THE CREW IS NOW SAFE AND BACK IN THE UK

The news crew is now safe and back in the UK, while their Ukrainian producer is with his family in Ukraine.

“The point is we were very lucky,” Ramsay said.

“But thousands of Ukrainians are dying, and families are being targeted by Russian hit squads just as we were, driving along in a family saloon and attacked.”