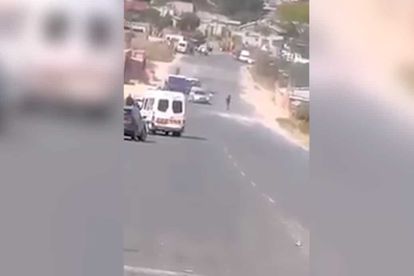 Cash-in-transit (CIT) robbers have not been so lucky lately but on Saturday, they managed to rob a money truck in Pienaar, near Nelspruit in Mpumalanga.

The robbers weren’t the only culprits though. Onlookers, who had found themselves at the scene of a very dangerous crime, chose to run for the money instead of choosing to be safe.

The police have confirmed that an unknown number of suspects released fire towards a G4S money truck at Luphisa Road in the afternoon.

Watch: Onlookers grab whatever’s left behind by the CIT robbers

This caused the CIT truck to come to a halt and the security guards were held at gunpoint by the robbers.

“the vehicle was blown up using explosives. Suspects fled the scene in three vehicles with an undisclosed amount of money.”

The Lieutenant-colonel also confirmed that no arrests have been made at this point.

In the video, the gentleman narrated what’s happening. According to his reports, he could see that the men had held the truck for its money.

When he saw that onlookers were also piling in to get whatever was left behind by the robbers, he referred to what was happening as a gang heist.

A gunshot was also heard in the video. However, there has been no confirmation of any people who suffered injuries during the robbery.

Muridili condemned the actions of the onlookers who recklessly put themselves in the line of danger for money.

The fight to curb the increasing CIT violence continues for the police who rely on the community for help, not expecting them to partake in the crime.