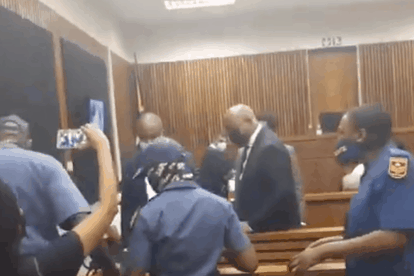 There are always fireworks when Julius Malema is present – and having Mbuyiseni Ndlozi for company means that we’re only ever a spark away from chaos in the courtroom. The fuse was lit on Thursday after the EFF leadership entered into a heated argument with a lawyer that threatened to turn physical.

Malema lays into lawyer – but what sparked the row?

Police officers were able to step in and resolve the situation before it got out of hand. But breathtaking footage from the Randburg Magistrate’s Court shows both Malema and Ndlozi towering over an advocated situated near the aisle.

The pair accused the lawman of blocking their exit from the courtroom. The verbal exchanges soured almost instantly, as Julius Malema bellowed questions towards the so-called ‘obstruction’. Always the able deputy, Mbuyiseni Ndlozi chimed in, calling the advocate a ‘liar’ when he tried to explain himself:

WATCH: While the court adjourned for a short break another scuffle broke out where Malema and Ndlozi had a go at a white lawyer accusing him of not respecting the court.#EFF #RandburgMagistrateCourt pic.twitter.com/NSPPdpkZll

And, for those who want a second angle on the drama:

[WATCH]There’s been an exchange of words by @Julius_S_Malema & @MbuyiseniNdlozi with one of the white lawyers(his race matters in this context).Malema was trying to get back inside the dock and then an exchange ensued.”You think being an Afrikaner makes you superior” @Newzroom405 pic.twitter.com/JboBwWquCd

Latest from the EFF assault trial

This fiery confrontation perhaps isn’t the best look for Malema or Ndlozi, considering they are both in court to defend themselves against assault charges. Although no contact was made between the parties, the manner in which both Red Berets registered their grievances has become one of the day’s major talking points.

Earlier on Thursday, Johannes Venter – the man who claims who was assaulted by the EFF representatives back in 2018 – had his testimony analysed by the defence. However, by the afternoon, all eyes were back on the CIC and his Commissar.