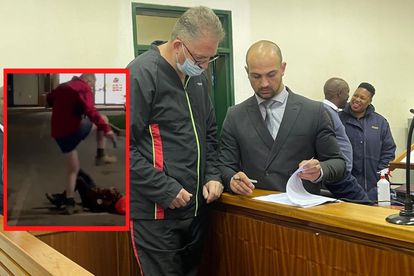 The gun-toting man, 52-year-old Corrie Pretorius, who allegedly assaulted a 16-year-old boy during an argument over salt seasoning in Groblersdal applied for bail on Friday.

THE ASSAULT ON THE TEEN SPARKED OUTRAGE IN SA – WATCH THE VIDEO:

Pretorius was arrested last week Wednesday on charges of assault with intent to cause grievous bodily harm.

A man arrested for allegedly assaulting a 16-year-old boy during an argument over salt seasoning in Groblersdal in Limpopo will remain in custody after the town’s magistrate’s court postponed his bail application on Friday.

In a video that shocked the nation, Corrie can be seen viciously attacking, kicking, and stomping a defenseless teenager while brandishing a gun.

The teenager was taken to the hospital after the assault and was later discharged.

PROTESTORS DEMANDED THAT HE SHOULD NOT BE GIVEN BAIL

Emotions ran high on Friday outside the court in Groblersdal where Corrie applied for bail.

WATCH AS PROTESTORS MARCHED TO THE COURT IN GROBLERSDAL ON FRIDAY:

ANC and EFF supporters protested outside the court to demand that the suspect not be given bail.

According to a report by News24, Corrie said he was assaulted while in custody.

In an affidavit read out by his lawyer, advocate JJ Venter, Corrie said he fears for his life:

“Due to the nature of the charges and the allegations as covered in detail by the media, my life is under threat in correctional services.”

Pretorius said in his affidavit.

The affidavit further stated that he was severely assaulted while incarcerated.

“It cannot be stated that I am not faced with the distinct possibility of being assaulted again.”

Pretorius said in his affidavit.

Corrie also said he was deeply traumatised by what had transpired in prison and was faced with the constant threat of a life-ending attack in prison.

The State opposed his bail application.

Investigating officer Jaffie Skhosana told the media outside court in Groblersdal that community members were angry about the severe assault.

He said Corrie is safer inside the prison as his life could be at risk should he be granted bail.

He also outlined the incidents reported by the suspect’s wife that some community members came to their home and threatened them by shaking the gate.

Corrie will remain in jail until next Wednesday, pending the bail application. He said he could afford R20 000 bail.

ALSO READ: What happened before the shocking assault on the Limpopo teenager?