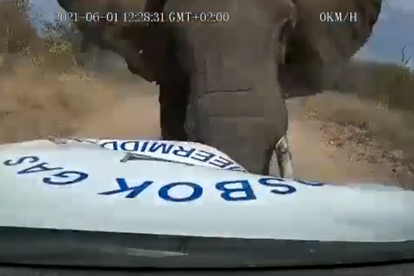 The driver of a bakkie in the Klaserie area of Kruger National Park was stunned into silence earlier this week, after clashing with a furious elephant on a dirt road. Needless to say, the vehicle came off MUCH worse.

During the drive, the bakkie appeared to inadvertently get too close to one of the elephant calves, putting the family on high alert. The clip shows the adult ellie approaching the car and apparently backing away – but this was only to get a good charge lined up. The grey marvel then bounds down the road, ready to deliver a clear message to the motorist.

The elephant gets its tusks under the bonnet, and crumples the metal covering without breaking a sweat. Bits of debris fly off the car during the attack, as the wild beast continues to push the bakkie away. After spinning the driver out, the Kruger native then heads back to its familial duties. The footage has since been shared hundreds of times online.

This incident was reported shortly after midday on Tuesday 1 June. Elize Roets, a professional animal communicator, uploaded the video yesterday. She reminded ALL game drive visitors that elephants remain one of the most ‘unpredictable threats‘ in their natural habitat – and they must be given space at all times.

#wildearth never think that Elephants wont storm. They are unpredictable This happened yesterday in the Klaserie pic.twitter.com/8VMJr278Pi

One question… why no screaming?

Let’s just hope the motorist actually owns the vehicle – otherwise, they will have a tough time telling Bosbok Gas why their company car has been damaged extensively. Another standout factor of the video is just how quiet the person in the car remains throughout the whole ordeal. Indeed, it did not go unnoticed on social media…

Or a scream. Cos that would've been me 😂