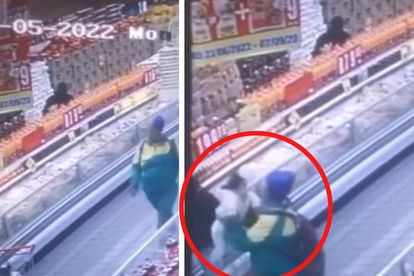 A shocking video has emerged of yet ANOTHER baby being snatched from her parents’ trolley inside a store.

Police are warning parents that a child or baby could be snatched and kidnapped in seconds within the ‘ blink of an eye’.

“A child could be snatched and kidnapped in seconds; therefore, it is of utmost importance that children are always kept within sight.”

This warning comes after a one-year-old girl was snatched from a trolley at a cash and carry store in Cleary Park in Gqebera on Monday afternoon.

TWO WOMEN WERE ARRESTED AND CHARGED WITH KIDNAPPING

In the video, the baby girl is seen seated in the trolley. While they were busy at the fridges and their backs to the trolley, it is alleged that a woman walked up to the little girl, touched her, and then walked away.

Within seconds, another female snatched the baby girl and quickly walked away with the girl in her arms.

Police spokesperson Colonel Priscilla Naidu said when the father turned around and noticed the baby girl was gone, he ran to the security at the door.

WHEN CONFRONTED, THE WOMEN SAID THEY WERE JUST JOKING WITH THE PARENTS

“As the security guard was about to close the doors, the first woman pointed out to the father that the child was with the second suspect.

“The women indicated that they were just joking with the parents. The two women and the complainant do not know each other.”

Naidu said the security at the cash and carry store notified police that the suspects and the complainant were at their offices.

“Police attended, and both suspects and complainants were brought to the police station, and a case of kidnapping was opened.”

She furthermore said the two women, aged 51 and 56 years, are detained and the investigation continues.

Last month, a mother took to social media to warn other mothers of how fast something like this could happen.

LAST MONTH IN ANOTHER SHOCKING VIDEO, A BABY WAS GRABBED IN SPAR

In the video, the young mother can be seen holding her baby in her arms and trying to free her hands while at the meat section, she put her eight-month-old in the trolley.

As the mother was bending down, a man who appeared to be working at the supermarket walked to the trolley, picked up the baby, and walked away with the baby. And this happened within seconds of the mother bending down.

Luckily the mother looked up and realised her baby was gone. She is seen franticly looking around before she sees the man walking away with her baby.

Click here to read the story and watch the video.