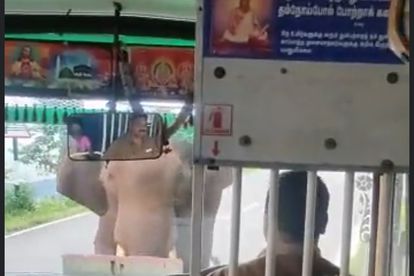 Passengers who were onboard a bus in India were scared out of their wits recently when a wild elephant broke the vehicle’s windshield during a commute.

According to India Today, the incident occurred around on Saturday morning, 25 September 2021, after the bus, which was en-route from Kotagiri to Mettupalayam, halted to let the elephant cross the road.

Instead of heading the other way, the animal charged at the bus, much to the shock of the passengers.

In the clip, the driver can be seen backing up the bus while the tusker keeps approaching. The elephant’s second strike at the bus putting huge cracks on the windshield glass. Passengers can also be heard in the video gasping and exclaiming in alarm.

The driver probably realised that the elephant was getting agitated because of the moving bus and parked it before he and other passengers at the front backed away from their seats.

According to officials, several wild animals, including wild boars and bears, have been crossing the Kotagiri-Mettupalayam hills freely.

At the same time, government officials have praised the bus driver for remaining calm during the incident.

“Huge respect for the driver of this Government bus in Nilgiris who kept his cool even under the terrifying hits on the bus from an agitated tusker,” tweeted Supriya Sahu, principal secretary for environment, climate change and forests for the government of Tamil Nadu.