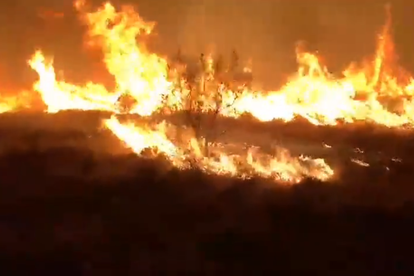 Runaway veld fires have torn across parts of the Northern Cape this week, with the blaze spreading more than 100km since it was first discovered on Saturday. The flames are approaching the town of Kimberley as of Tuesday morning, and firefighters now face an uphill battle to protect livestock and crops.

Latest news and updates from the N12 fires

Hot, dry, and windy conditions have aided and abetted the inferno as it wreaks havoc across the province. From what we’ve been told by emergency response teams in the Northern Cape, the fires are travelling quickly:

Fires raging to the south of Kimberley. @ Jacobsdal/Magersfontein. @wo_fire are you guys around to help? pic.twitter.com/Oo16g22iVw

A leading emergency response team at the scene, Emer-G-Med, has reported that at least one firefighter has been hospitalised for smoke inhalation. Several civilians have also suffered a similar fate, with some locals needing treatment for burns as well. Both the N8 and N12 in the Northern Cape have large sections closed off.

“Severe grass fires were raging yesterday in the Kimberley area. A number of patients have been transported to local hospitals for smoke inhalation and burns during the course of the day. Parts of the N12 highway are also closed.”