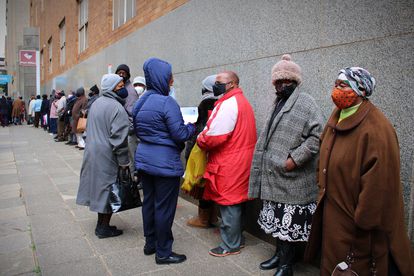 Members of the Hillbrow Community Health Centre checking if pensioners in the queue have received the Covid-19 vaccine. Pensioners braved icy cold conditions as they stood in line outside Marshalltown Post Office to collect their grants. Photo: Masego Mafata/GroundUp

Members of the Hillbrow Community Health Centre checking if pensioners in the queue have received the Covid-19 vaccine. Pensioners braved icy cold conditions as they stood in line outside Marshalltown Post Office to collect their grants. Photo: Masego Mafata/GroundUp

A vaccine passport may soon be a reality for South Africans. President Cyril Ramaphosa announced on Sunday that the government is looking at ways to implement a vaccine passport to open travel and allow people to attend sports and religious gatherings. He said various methods could be considered including digital devices.

Ramaphosa addressed the nation on Sunday night to announce Cabinet’s decision to move the country back to Lockdown Level 2. He announced that 14.6 million vaccine doses had been administered to date. He reiterated that as many as one million does are administered every 4 to 5 days.

“We will also be providing further information on an approach to ‘vaccine passports’, which can be used as evidence of vaccination for various purposes and events.”

Ramaphosa added that a vaccine passport could open up the possibility of further travel, and bring fans back to stadiums around the country.

“Let us make it our mission to vaccinate as many people as we can, so that we can move ahead with the task of rebuilding our economy and our lives.

“The day will soon come when we can gather again without restrictions, fill stadiums and music venues, travel and move about freely without the fear of becoming ill or losing our loved ones,”

“Government has secured sufficient vaccines to vaccinate the entire adult population, and the supply of vaccines is no longer a constraint.”

Last week, Health Minister Joe Phaahla confirmed that SA citizens who have received their COVID-19 jabs will soon be issued with ‘digital vaccination certificates’ by the end of this week.

WHAT IS A VACCINE PASSPORT?

The document would be accessible via a smartphone, but a physical copy can also be printed off and stored in person. The minister went on to state:

On Wednesday, Deputy President David Mabuza suggested that the country would need to hit ‘a 70% vaccination rate’ before stadiums and concert venues could fully reopen. He believes this target can be reached before the end of the year, but it’ll be touch and go to see if as many as 7 out of 10 South Africans actually do get vaccinated.