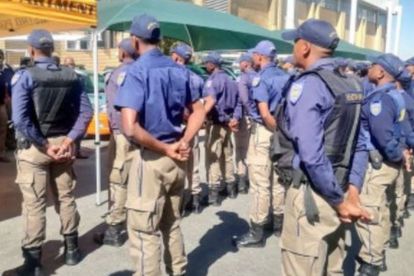 A JMPD undercover officer was shot and wounded in Hillbrow on Tuesday. Photo: JMPD/Facebook

A JMPD undercover officer was shot and wounded in Hillbrow on Tuesday. Photo: JMPD/Facebook

An undercover officer from the Johannesburg Metropolitan Police Department (JMPD) was shot in Hillbrow on Tuesday while chasing a suspect who evaded a search.

“Whilst conducting the search, one male ran away. Officers gave chase and whilst in pursuit the male shot at the officers,”

An officer was shot and sustained injuries to his chest and hip.

The suspect then dropped his firearm and fled the scene, Fihla explained.

The undercover officer was immediately rushed to the hospital and he is currently in a stable condition.

“JMPD wishes our injured officer a speedy recovery and no stone will be left unturned until the suspect is apprehended,”

A case of attempted murder has been opened at Hillbrow SAPS for further investigation.

Meanwhile, on Monday in Gqeberha, Eastern Cape,  shootout broke out between police officers and a gang that is believed to be involved in a number of shooting incidents in the area.

The Independent Police Investigative Directorate (IPID) is investigating the police’s involvement in the death of an alleged gangster on Monday night, 16 May.

Police officers were reportedly following up on information about a problematic gang in the area.

“The tip-off led them to a house in Walmer. Upon approaching the house, the dog started barking at the police and this alerted people in the house that someone was outside,”

The occupants of the house allegedly opened fire on the police officers and the shootout lasted for approximately an hour, according to IPID.