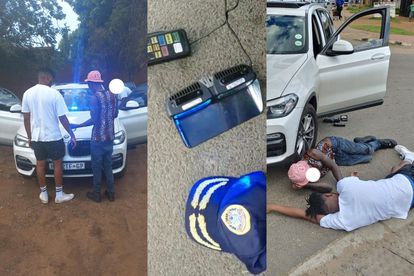 Two suspects were nabbed in possession of a suspected stolen Johannesburg Metro Police Department (JMPD) vehicle and impersonating an officer this past weekend.

HOW THE TWO SUSPECTS WERE CAUGHT WITH A JMPD VEHICLE

“On Saturday afternoon 19 November 2022, whilst conducting crime prevention patrols along Koma Road in Jabulani, officers noticed a white BMW X3 driving recklessly with flashing blue lights fitted on the front and rear windscreens and also in the grill of the vehicle,” he said.

“The police officers conducted an inquiry using the registration of the vehicle. The results revealed that it belonged to Idrive Car Rental.”

He added that the officers became suspicious as to why a rental vehicle was fitted with blue lights.

“The officers immediately stopped the vehicle. The two male occupants were asked for identification as the passenger was allegedly wearing a JMPD Director’s combat cap. Both occupants did not have any appointment cards to identify themselves as police officers.
Officers conducted a further inquiry which revealed that the vehicle is a JMPD vehicle used at the JMPD Head Quarters.
Whilst searching the vehicle and the occupants it was discovered that they were drinking alcohol in the vehicle and the driver did not have a driving license in his possession,” Fihla detailed.

He further said the suspect who was driving the vehicle was taken to the Dube Vocational Alcohol Evidence Centre where he was breathalysed and was found to have had alcohol but was under the legal limit.

“The suspects were questioned as to how they acquired the vehicle and they alleged that it was given to them by a JMPD employee, however, a case of theft of a motor vehicle was opened and registered at Protea Glen SAPS by the alleged JMPD officer.
Both suspects were arrested and detained at Jabulani SAPS. They were charged with possession of a suspected stolen motor vehicle and impersonating a police officer,” Fihla explained.