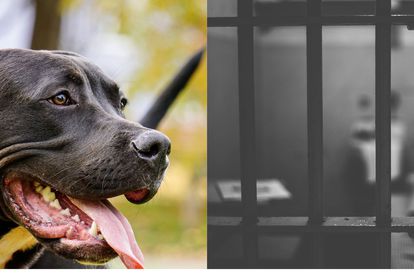 The apprehended owner of two Pitbull terriers that savaged a three-year-old boy in Hennenman in the Free State was released on bail.

OWNER OF PITBULLS ARRESTED FOR HOURS

The 21-year-old Lebohang Pali, who was arrested this morning, was granted R300 bail, according to the SABC.

This owner of the Pitbull terriers was charged for violating the law relating to the keeping of vicious dogs. This after an inquest docket was opened for further investigation.

Nevertheless, following the tragic incident, Pali had to be whisked away by police after angry residents threatened to attack him.

POLICE SAVE THE SUSPECT FROM ANGRY COMMUNITY

Since the angry mob could not get their hands on Pale, they directed their anger at one of the dogs which they set alight. However, the other dog was lucky to be rescued by the SPCA for safekeeping before being harmed.

It is also reported that Public Order Policing unit members had to be deployed to the area as tensions flared up.

This latest attack aggravated the call for Pitbulls to be banned after an eight-year-old boy was mangled to death by this dreaded breed last week.

Victim, Olebogeng Mosime died as a result of the attack by a neighbour’s Pitbull in Vista Park, Bloemfontein.

FOR OR AGAINST PITBULLS BE HEARD

If you support the ban on Pitbulls, join thousands of South Africans and sign the petition on the Sizwe Kupelo Foundation Facebook page otherwise if you are against the ban, join the opposing petition which is on the road to 35000 signatures.

Pali will be back in court this Wednesday, 23 November.

‘The Last of Us’: Series elevates the themes of love and family