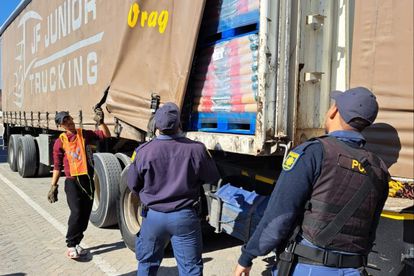 Police searched trucks coming in and out of the country during the operation. PHOTO: SAPS

Police searched trucks coming in and out of the country during the operation. PHOTO: SAPS

Two of the country’s most wanted suspects are among 65 alleged criminals who were nabbed during a police operation in the Northern Cape.

The multidisciplinary operation, dubbed Operation Gijima, targeted borders, theft of motor vehicles and drug trafficking among other crimes in the province. The operation took place between Wednesday and Friday.

POLICE TARGET AND ARREST CRIMINALS IN THE PROVINCE

The focus areas of the operation were to target theft of motor vehicles, illicit drug trafficking, and illicit trafficking of firearms and ammunition.

“16 wanted suspects on the daily wanted list were arrested for various crimes including rape, domestic violence, assault GBH, housebreaking, theft and other crimes.”

10 others were arrested for possession and dealing in drugs. Drugs valued at R510 000 were confiscated in various locations in Port Nolloth, Steinkopf, Garies, Rosedale, Paballelo, Keimos and Kakamas.

19 others were arrested for other crimes.

“A total of 65 arrests were effected during the period.”

Numerous vehicle checkpoints were conducted on national and secondary roads. Vehicles were stopped and persons were searched, including trucks cross the border at the two ports of entry.

The focus areas of the operation also included the Vioolsdrift Port of Entry which borders Namibia on the N7, 120km from Springbok. The Nakop Port of Entry on the N10, 130km from Upington was also targeted.

“18 undocumented Lesotho nationals were apprehended and arrested on a farm in the Augrabies farming area. 448 litres of alcohol to the value of R11 485 was seized during raids at liquor outlets in Upington in conjunction with the Northern Cape Liquor Board.”