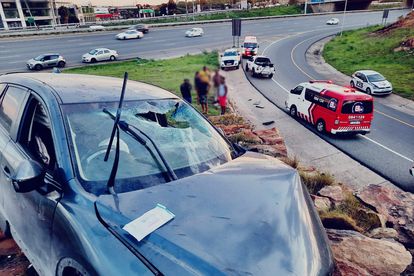 Two men were seriously injured in a single-vehicle rollover accident on the Voortrekker road on-ramp on Sunday evening.

BOTH MEN WERE EJECTED IN THE ACCIDENT

According to ER24 spokesperson Ross Campbell, paramedics were on the scene at 18:13 on Sunday along with the Ekurhuleni Fire Department and the EMPD.

The accident happened on the Voortrekker Road on-ramp of the N12 in Alberton.

“The vehicle had rolled up an embankment, and the two men had both been ejected.

“One patient was found to be in a critical condition and required Advanced Life Support interventions to stabilise his condition before ER24 transported him to the hospital for further care,” he said.

Campbell said the second patient was found in a serious condition and was treated and transported to the hospital by another private service on the scene.

ALSO READ: Mother, father, and child burnt to death in a HORRIFIC accident

Meanwhile, in an unrelated horrific accident, a mother, father, and child, was burnt to death in Kimberley on Saturday evening.

According to Emer-G-Med spokesperson Kyle van Reenen, the accident happened along Smidtsdrift Road.

“Paramedics arrived on the scene at approximately 23h00 to find two light motor vehicles had collided head-on, along Smidtsdrift Road,” he said.

ONE OF THE VEHICLES BURST INTO FLAMES ON IMPACT

Van Reenen said one of the vehicles burst into flames on impact, and sadly the occupants, a mother, father, and child, were burnt to death.

“Two occupants from the second vehicle sustained moderate injuries and were treated and stabilized on the scene before being taken to a hospital by ambulance for further care,” Van Reenen said.

He added that the South African Police Services were in attendance and will be investigating accordingly.