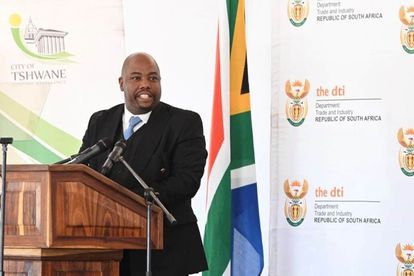 In a statement issued by the Democratic Alliance (DA) on Tuesday 26 November 2019, Gauteng Leader John Moodey MPL stated that Tshwane mayor Stevens Mokgalapa would be placed on special leave.

“The DA leadership met with Mayor Mokgalapa yesterday and today [25 and 26 November 2019] to discuss the serious allegations made against him and Member of the Mayoral Committee (MMC) for Transport Councillor Sheila Senkubuge, claimed to be supported by an audio clip that is being widely distributed.”

As reported by Kgothatso Madisa from Sowetan Live, the DA’s regional chairperson for Tshwane, Abel Tau, will be installed as the interim mayor while the investigations are underway.

Mokgalapa shared a statement on social media as well. He confirmed the he will taking leave from Thursday 28 November 2019: The statement can be perused below. Mokgalapa explained:

“Having said that, I will continue to avail myself for party processes that are currently underway. I assure residents that I’m committed to cooperating with this process throughout. No further communication will be made in this regard until investigations are concluded.”

Mokgalapa is at the centre of a scandal after being blackmailed for an audio recording. The clip allegedly details his sexual misconduct with MMC Sheila Senkubuge. The recording was leaked over the weekend.

Motion for no confidence

Following the scandal, the Economic Freedom Fighters (EFF) on Monday called for Mokgalapa to step down as mayor. In the statement released on Tuesday, EFF spokesperson Mbuyiseni Ndlozi said:

“Our motion is premised on substantial and glaring failures by the executive mayor, including but not limited to […] an escalating water crisis in the city, [and] a general deterioration of fiscal and procurement management standards at the municipality.”

Ndlozi added that the deterioration of standards is a “continuation of a trend since the DA took leadership” of the municipality; claiming that the situation spiraled out of control during Mokgalapa’s tenure.

“Despite the seriousness of these challenges, Mr Mokgalapa has demonstrated no urgency and wherewithal to resolve these challenges. He does not seem to be interested in the government of the City at all, but rather obsessed with the idea of being in power.”

Moodey “noted” the EFF’s motion of no confidence in Mokgalapa; adding that the DA “has made great progress since taking over the City of Tshwane administration three years ago.

Moodey also added that the matter will be investigated; both Mokgalapa and MMC Sheila Senkubuge “will be given the opportunity to present their version of events.”

In addition, the matter has been referred to the Ethics Committee under consideration of Clause 2B of the Code of Conduct for Councillors, as the DA is “committed to provide clean governance.”