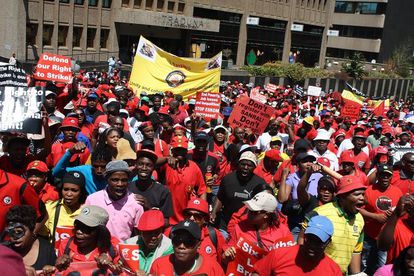 SATAWU said its members will continue to strike. Image: Facebook/SATAWU.

SATAWU said its members will continue to strike. Image: Facebook/SATAWU.

Transnet announced it reached a three-year wage deal with its majority union, the United National Transport Union (UNTU), on Monday, 17 October. The other recognised union, the SA Transport and Allied Workers Union (SATAWU) rejected the offer over the weekend.

SATAWU General Secretary Jack Mazibuko said the union was shocked that its class struggle had been “betrayed” on Monday.

Mazibuko highlighted that the agreement lacked a “no-retrenchment clause”, the manner in which lost wages will be deducted was not set out and the across-the-board increases were below inflation for the next three years.

“…our industrial action should continue as planned regardless of the betrayal in question,” said the General Secretary. He said the union would intensify its efforts.

Transnet’s agreement with UNTU included a 6% basic wage increase for levels H to L and a 6% increase on the annual cost-to-company package for level G in Year 1 and Year 3. In Year 2, the increases fall to 5.5%.

The deal also includes an increase to the medical aid subsidy – in line with the wage increase – and an increase in the housing allowance from 2023/24 and the following year.

The back pay will be paid to employees for the period 1 April to 30 September 2022 in two tranches. They will receive three months’ money on 15 November and 16 January 2023.

At the time of the agreement, UNTU accounted for 53.9% of Transnet’s bargaining unit employees. The state-owned entity stressed that the agreement applied to all employees regardless of union affiliation.

“The company’s priority in the immediate is clearing any backlogs across the port and rail system – prioritising urgent and time-sensitive cargo and implementing recovery plan, working with industry and customers,” said Transnet.