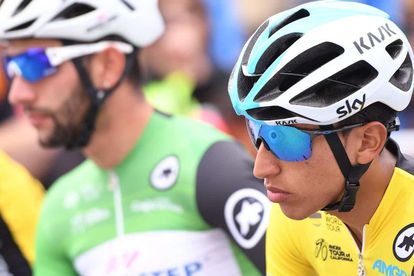 KING CITY, CA – MAY 15: Egan Bernal Gomez of Colombia and Team Sky before stage three of the 13th Amgen Tour of California, a 197km stage from King City to Laguna Seca on May 15, 2018 in King City, California. (Photo by Matteo Marchi/Getty Images)

KING CITY, CA – MAY 15: Egan Bernal Gomez of Colombia and Team Sky before stage three of the 13th Amgen Tour of California, a 197km stage from King City to Laguna Seca on May 15, 2018 in King City, California. (Photo by Matteo Marchi/Getty Images)

What is age but a number, right? Well, it’s also a way to make us feel like we’ve either achieved nothing or that there might still be some hope for us to go on and do great things, depending on which way you look at it.

If you’re at the other end of 30, you might feel like you’ve achieved nothing when you consider the youngest riders at this year’s Tour de France are just 21 years old.

(Team Sky) and David Gaudu (Team Groupama) are both 21 and both are making their debut at the Tour.

If you’re more of a glass half full side of things, then you might take heart from the fact that the tour features two riders who are 40 years old.

Franco Pellizotti (Bahrain Merida Pro Cycling Team) and Mathew Hayman (Mitchelton-Scott) are both in that age range. Both have got a fair few Tours under their lycra suits already.

In terms of average age per team, Groupama is the youngest (27 years), Team Sky is the fifth youngest (28 years and 243 days). Bahrain Merida is the oldest, 33 years on the dot, while South Africa’s Team Dimension Data is the fourth oldest, 31 years and 284 days.

Believe it or not, though, this year’s oldest rider still has a long way to go before breaking the record for the oldest ever rider at the tour. Henri Paret was 50 when he finished the 1904 Tour.

As for the youngest ever, Danny van Poppel was 19 at the 2013 Tour, who turned 20 a week after the race finished.

The youngest ever winner of the Tour de France was Henri Cornet in 1904 aged 19 years 350 days. He actually finished fifth but the riders who finished before him – Maurice Garin, Lucien Pothier, César Garin, and Hippolyte Aucouturier were all disqualified.