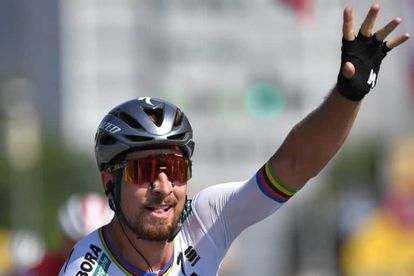 Peter Sagan stormed to victory on stage two of the Tour de France with a sprint finish blitz in La Roche-sur-Yon.

The Slovak star pipped Sonny Colbrelli and Arnaud Demare to the line at the end of a flat-as-a-pancake stage in the Sunday sun.

Yellow jersey Fernando Gaviria was among those scuppered by a crash with less than 2 kilometres to go.

Veteran Frenchman Sylvain Chavanel was man alone for the majority of the run from Mouilleron-Saint-Germain after making his early break stick.

The 39-year-old was just over ten kilometres from the finish line when he was absorbed by the peloton.

The Spanish elder statesman took a tumble in innocuous circumstances before attempting to jump on a replacement bike.

A knackered elbow, wrist, collar bone and who knows what else put paid to his brave attempt, though.

The intrigue continues tomorrow with the team time trial in Cholet.