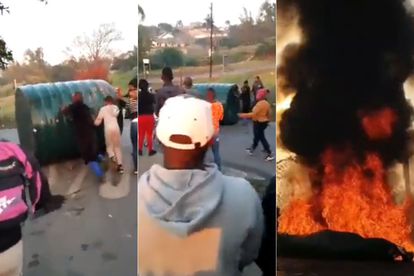 On the morning of Thursday, 25 August, some residents in Tongaat took to the streets where they burnt a JoJo tank. Photo: @LebogangStsoko7 / Twitter

On the morning of Thursday, 25 August, some residents in Tongaat took to the streets where they burnt a JoJo tank. Photo: @LebogangStsoko7 / Twitter

Spokesperson for the Metro Police Senior Superintendent Geraldine Stevens revealed that the protests were believed to be over not having running water for four months, reports IOL.

Social media is rife with videos of the protests where residents can be seen burning a JoJo water tank, tyres were also burnt during this morning’s demonstration.

Motorists are advised to use alternative routes

Motorists have been urged to use alternative routes today as the R102 at Gandhi’s Hill and Hambanathi had been closed. Stevens said metro police and South African Police Service (SAPS) officers were at the scene.

Many residents in Tongaat have not received piped water since the April floods and they are far from impressed. In July, the rebuilding of the Tongaat Water Treatment Plant began. This project is expected to be completed in October and will cost around R31 million.

The Municipality stated that 50% of the workforce for the rebuilding project is from the surrounding community. Mayor Mxolisi Kaunda stated that the community met the contractor who will be rebuilding the Tongaat Water Treatment Plant on Monday, 11 July.

Previously, it was reported that certain residents in oThongathi (Tongaat) have been without piped water for 127 days. Ward Councillor Yogis Govender revealed that areas such as Ghandinager, Brake Village, certain parts of Belvedere, oThongathi CBD and the oThongathi industrial area have been impacted by the KZN floods, leaving them without water.

Govender said residents have become despondent. Govender explained how some elderly folk have had to carry 20-litre buckets of water up several flights of stairs. She noted how residents felt angered by the ‘dismissive manner’ in which the Municipality had responded to their issues.

“Burns, head injuries, back problems are on increase. It’s taking its toll on everyone especially our elderly and frail. The short-term measure of tankers has been absolutely disastrous and has seen Tongaat rely largely on the private sector,” said Govender. Read the full story here.