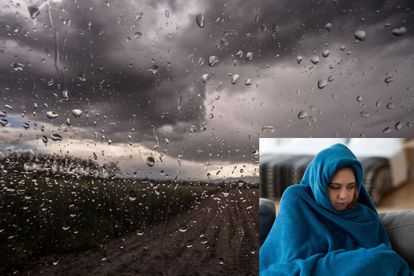 More COLD weather is expected in several parts of SA on Thursday. This comes as a cold front made landfall early on Thursday.

WATCH AS THE COLD FRONT MADE LANDFALL THIS MORNING

According to VoxWeather, the cold front made landfall in the Western Cape early on Thursday morning. On Friday, the cold weather is expected to spread to the wild coast and south coast, while warmer temperatures are expected in the rest of the country.

On Thursday, heavy rainfall was confirmed in several parts of the Western Cape. It is a cloudy, cold, and windy day for Western Cape on Thursday.

A level 1 warning was issued for damaging waves on Thursday.

SEVERAL WARNINGS WERE ISSUED FOR THURSDAY

This could result in difficulty in navigation at sea for small vessels, and one-person watercraft (e.g., kayaks) is possible.

“Small vessels at risk of taking on water and capsizing in locality. Localized disruption of small harbours for a short period of time.

“Be aware of large, unpredictable waves along the coast. Small vessels are advised to seek shelter in harbours, bays or inlets.”

A WARNING FOR DAMAGING WAVES WAS ISSUED

The SAWS also warned of damaging waves on Thursday. A level 1 warning was issued for these areas:

The damaging winds could result in localized damage to formal/informal settlements.

“Fallen trees may affect transport routes, properties, and localized power and communication interruption. Due to dust, visibility may be reduced on the road.

“Some transport routes and travel services affected, and high-sided vehicles due to crosswind on exposed high-level roads by the wind.

It warned of sudden cross winds if traveling, especially between buildings, fallen trees, or power lines.

“Ensure that all temporary structures are well anchored.”

THE PUBLIC IS ADVISED NOT TO START OPEN FIRES

Residents in the following areas were warned of veld fire conditions on Thursday:

“Conditions are such that the FDI index will be above 75. Under these conditions, fires may develop and spread rapidly, resulting in damage to grazing land, crops, property, and possible loss of life.

“The public is advised not to start open fires as conditions will be conducive to runaway fires. Fire teams, labour and equipment, are to be placed on full standby.

“At the first sign of smoke, every possible measure should be taken in order to bring the fire under control in the shortest possible time.”