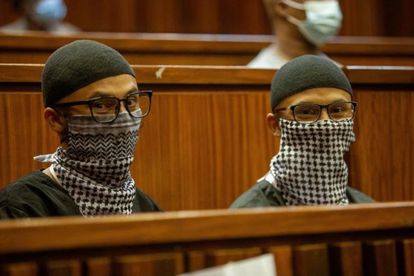 The Thulsie twins have been released on parole. Photo: Gallo Images/Papi Morake

The Thulsie twins have been released on parole. Photo: Gallo Images/Papi Morake

Convicted terrorists Brandon-Lee and Tony-Lee Thulsie have been released on parole.

The twins have already spent six years behind bars

The twins’ attorney Yousha Tayob confirmed that they were released. Their release comes six months after their trial came to an end in the Johannesburg High Court. The Thulsie twins struck a deal with the State after spending six years behind bars waiting for their trial.

While in court this year, Brandon-lee was given eight years while Tony-Lee was given 11 years. The judge noted that the time the Thulsies spent in prison would be taken into consideration.

In July 2016, Brandon-Lee and Tony-Lee were arrested after being accused of the following:

The twins allegedly planned the bombings on behalf of ISIS.

TimesLIVE reports that the 12 original charges against the Thulsie twins were removed to accommodate the charges they admitted to. Their attorney revealed in an interview that due to the nature of the twins’ charges, parts of their plea deal will remain confidential.

Terror twins strike deal with State: Thulsie brothers could be out of prison in 5 years

Earlier this year, it was reported that the Thulsie twins, Brandon-Lee and Tony-Lee, entered a plea and sentencing agreement with the State on Monday, 7 February – the same day their long-awaited terrorism trial was expected to begin.

The Thulsie twins have been in State custody for five years and seven months. They were arrested in July 2016 for allegedly plotting terror attacks on South African soil. The State alleged that the brothers have links to ISIS and were planning to bomb the US embassy, the UK High Commission and Jewish institutions in the country.

The brothers also allegedly attempted to head to Syria and join the terrorist group on two occasions. Both brothers pleaded guilty to attempting to leave the country to join ISIS, while Brandon-Lee pleaded guilty to being in possession of an ISIS guide, which detailed how to acquire weapons and make bombs. Read the full story here.