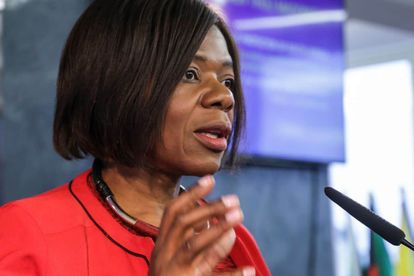 Former public protector Thuli Madonsela and Economic Freedom Fighters (EFF) member Mbuyiseni Ndlozi were at each other’s necks on Twitter on Monday regarding the Clicks protests. On Tuesday 8 September, the debate continued with the CIC himself Julius Malema.

The EFF, as promised, flocked to various Clicks stores across the country on Monday in protest of its controversial hair campaign in which it labelled white women’s hair as “dry, damaged and dull” and white women’s hair as “normal”. Following anger and nationwide outcry on social media, the EFF said it would address the issue directly at Clicks stores. The protest became violent and in the process, two stores were petrol bombed, one in Mpumalanga and one in Limpopo.

Madonsela, who tried to suggest that violent protest was not the answer, received heavy flak from the red berets to put it lightly. Ndlozi eventually told Madonsela to “find the nearest hell”.

Amid the chaos, Madonsela took to Twitter saying that in her view, the Clicks case #BlackHairMatters, is a textbook case of “unconscious bias”.

“Calling it out is great but anarchy and violence undermine the cause,” she said.

Ndlozi, did not take lightly to her opinion, saying; “Find the nearest hell Thuli… when you get there, you know the cerebral thing to do. We need no approval from your coconut logic. Protest is the constitutionally right thing to do when authorities do not punish racism. #BlackLivesMatter and we stop Racism before it kills Blacks!”

“Are the words you used to call for the Clicks protest, a call for peaceful protest sir? Is stopping people from using their right to buy wherever they want an act of peace? Is preventing people from working and getting their meds peaceful? What peace is that sir?” she asked.

At the time of publishing, Malema did not directly respond but we expect the debate to continue. Meanwhile, Democratic Alliance (DA) member Phumzile Van Damme said she couldn’t pick up her prescription medication at Clicks.

“My script is on the Clicks system. I can survive one night. I will be fine. But others may not. I had to stay on the phone and talk to someone having a panic attack outside a Clicks because she too couldn’t get her meds,” she said.

Malema tweeted on Monday saying; “We thank all Commissars, provincial, regional, and branch leaders and all our ground forces for your discipline today. Tomorrow we are on again. Ours is a peaceful protest to help Clicks close all their stores in SA. United in action, together with workers. Salute!”

The African National Congress Youth League (ANCYL), in a statement on Monday 7 September, said it condemns the Clicks hair campaign, as well as the EFF’s form of protest.

Over and above that, the youth league said it would call on the South African Human Rights Commission (SAHRC) to investigate Clicks, as well as Unilever and the broader South African advertising industry.

“We will also request the SAHRC to investigate the checks and balances in the South African advertising industry to assess how such racist advertisements were approved by their regulatory bodies,” it said.